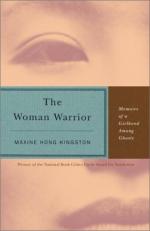 Introduction & Overview of The Woman Warrior

Maxine Hong Kingston
This Study Guide consists of approximately 78 pages of chapter summaries, quotes, character analysis, themes, and more - everything you need to sharpen your knowledge of The Woman Warrior.

This detailed literature summary also contains Bibliography and a Free Quiz on The Woman Warrior by Maxine Hong Kingston.

The Woman Warrior experienced immediate success upon its publication in 1976. It became an instant bestseller and secured a place in the top ten nonfiction books of the decade. Because Maxine Hong Kingston deals with stories of growth in individuals and among generations in two different cultures, teachers from various disciplines utilize the book to supplement their instruction. Some use it to discuss women's topics, while others find it serves well to encourage and support dialogue regarding sociological, historical, literary, and ethnic issues. Critics praise Kingston's ability to deal with the concerns of identity formation in Chinese women who have long been oppressed by Chinese male tradition. In addition, her skill at story telling continues the Chinese art of "talk story" but advances the oral custom to a written treasure to be passed down through generations.

The Woman Warrior has also received negative reviews because critics find its content difficult to categorize. While Knopf published the book as nonfiction, many reviewers claim that Kingston includes too many nonspecific memories for the book to be considered anything but fiction. Kingston admits that the main sources of information for her books are her mother's tales and her father's reticence, along with her own memories and imagination. Kingston defends her technique, however. She says that the book is not specifically an autobiography but combines truth and fiction in an autobiographical form.

Whether readers love the book for its inspiring message about female empowerment or despise it for its sometimes cruel themes, most will agree with Pin-chia Feng, who wrote in the Dictionary of Literary Biography, "Kingston's writing ... embodies the collective spirit of the Chinese American community."

More summaries and resources for teaching or studying The Woman Warrior.

The Woman Warrior from Gale. ©2005-2006 Thomson Gale, a part of the Thomson Corporation. All rights reserved.