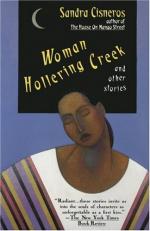 Sandra Cisneros
This Study Guide consists of approximately 39 pages of chapter summaries, quotes, character analysis, themes, and more - everything you need to sharpen your knowledge of Woman Hollering Creek.

Borderlands/La Frontera: The New Mestiza (1987) by Gloria Anzaldua, a Chicana writer. This largely nonfiction volume also includes poetry. In it Anzaldua analyzes the experiences of Mexicans/Chicanos in the United States.

Latina, Women's Voices from the Borderlands (1995) is edited by Lillian Castillo-Speed. This collection of writings from 31 Latina writers includes short stories, excerpts from novels, and essays that describe lives on the borders of languages, races, and communities.

Cuentos: Stories by Latinas (1983) is edited by Alma Gomez, Cherrie Moraga, and Mariana Romo-Carmona. These stories describe the lives of Latina women in their struggle to overcome the challenges of living in complex cultural contexts.

This collection of poetry, prose, criticism and visual art includes literature by and about Chicanas.

Woman Hollering Creek from Gale. ©2005-2006 Thomson Gale, a part of the Thomson Corporation. All rights reserved.