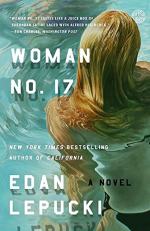 Woman No. 17 Summary & Study Guide includes comprehensive information and analysis to help you understand the book. This study guide contains the following sections:

This detailed literature summary also contains Quotes and a Free Quiz on Woman No. 17 by Edan Lepucki.

The following version of this book was used to create this study guide: Lepucki, Edan. Woman No. 17. New York: Penguin Random House, 2017.

The novel is told in alternating first-person past narrations. Lady begins narrating the novel. She was a 41-year-old woman who had recently separated from her husband, Karl. She decided that she needed to hire a live-in nanny so that she would have time to get out of the house and work on the memoir that she had been given a book deal to write. She had a three-year-old boy named Devin with her husband Karl, and an 18-year-old boy named Seth who was nonverbal from a previous relationship in her early twenties. The memoir was supposed to be about her experience raising Seth.

A young girl who went by the name S interviewed for the nanny position and Lady immediately hired her. Lady had a tumultuous upbringing with her emotionally abusive mother, Simone. When Lady was 22, she started dating a man named Marco and cut off communication with her mother, who was not supportive. Lady got pregnant and was going to have an abortion, but Marco’s mother was dying and Marco wanted to give her a grandchild, which was her greatest wish. Lady agreed because she thought that the pregnancy would change Marco and improve their relationship.

When S started working with Lady, Lady started going out to work on her memoir, but she was not able to get much writing done. Instead, she spent her time logging onto Twitter and looking at Seth’s tweets, until one day she finally made her own account. She was supposed to be writing about the origins of Seth’s disability, but she did not know the origin. All she knew was that she felt vaguely as if it had something to do with her own mother, who began babysitting Seth after he was born despite Lady’s better judgement.

Esther graduated from college in Berkley with a major in childhood education and a minor in art and had no idea what to do with her life. Her boyfriend, an artist named Everett, broke up with her just before graduation because she was not enough of an artist for him. Depressed, she tried to mimic him and do a radical art project, but it failed and she was humiliated. She decided to leave her father and move down to LA where she changed her name to S Fowler and decided to start a new project in which she would become her mother like a method actor.

Esther moved in with her mother briefly and then started working for Lady so she moved into the cottage in the backyard. She started drinking heavily, like her mother was prone to do, and flirting with Seth, Lady’s mute son.

Lady continued to try and write her memoir. She thought that Seth’s disability had been caused by the trauma that his grandmother put him through. Simone paid Marco 9,000 dollars to leave his family, and Seth was there to witness the transaction. Lady had met Karl through his sister, Kit Daniel’s, a famous photographer who had exploited Lady’s poverty and taken an unflattering photo of her. Karl had seen the photo and fallen in love with Lady. She had kicked Karl out because she had recently discovered that several years ago he had helped Seth hide a relationship with a girl named Tanya.

Esther went to visit her mother and discovered that she had been keeping a rabbit in her closet. Esther brought it home with her and asked Lady if she could keep it in the college. Karl told Lady that Seth wanted to meet his father. Lady looked up Marco online and found a Twitter profile that belonged to him, then sent him a message. Esther continued her art project by drinking and painting pictures. She posted an add on Craigslist, asking for people to send her pictures of their mothers so that she could paint the photos and then recreate them by dressing up like the mothers and posing for a photograph. She got a lot of strange men sending her pictures of their genitalia instead, so Seth helped her out and posted on Twitter to get responses for her from his followers. Lady saw the post and sent a picture of herself and Marco. Esther recognized Lady in the photo and called Seth. He came into her cottage and the two of them kissed.

Lady got a message from Marco and they planned to meet the following week at his house. She went to lunch with Kit and got in a fight with her when she learned that Kit was taking photographs of Seth. Lady left and went impulsively to Marco’s house with Devin. They spoke for a while and then they began an affair. Esther and Seth started spending more time together and she told him all about her art project. They also began an affair that they kept secret from Lady. Lady and Esther started spending time together, too. One night, the two women got drunk and confessed to Esther that Devin was not Karl’s son. Esther blacked out and woke up to find her rabbit drowned in the pool. Lady woke up to the news that her mother had died in a car accident. She went to meet Karl and then left to go see Marco. Esther went to take a photo of herself dressed like Lady and then developed her photos. While she waited, she went to a bar. Kit and Seth came to find her because Seth was afraid she was going to drink and drive. Kit looked at her photos and said they were derivative and then suggested that Esther ought to do something with the photos of penises that men had been sending her. Kit left and Seth asked Esther to drive him to his father’s house. They went and discovered Lady there with Marco. The truth about their affair came out, and then the truth about Esther and Seth came out. Back at the house, Esther’s parents came to find her because she had been distant and seemed troubled. The truth of her false identities came to light and Lady fired her. Esther went back to Berkley with her father and started a new art project at Kit’s suggestion that was well-received by critics. Lady took some time for herself and then, eight months later, started putting her life back together by reconnecting with both Seth and Karl, who both seemed willing to give her a second chance.