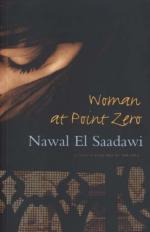 Nawal el-Saadawi
This Study Guide consists of approximately 35 pages of chapter summaries, quotes, character analysis, themes, and more - everything you need to sharpen your knowledge of Woman at Point Zero.

This detailed literature summary also contains Topics for Discussion and a Free Quiz on Woman at Point Zero by Nawal el-Saadawi.

Woman at Point Zero by Nawal El Saadawi is an engrossing, dramatized non-fiction work about the life of Firdaus, an Egyptian woman sentenced to death for killing a man. After suffering greatly at the hands of men through her entire life, Firdaus becomes a prostitute, but she is imprisoned for killing a pimp who beats and rapes her. "Woman at Point Zero" is a heart wrenching tale that readers will find hard to put down.

In 1973, Nawal El Saadawi hears about Firdaus, a woman who has been sentenced to death for killing a man, from her doctor friend at Qanatire Prison. At first, Firdaus refuses to meet Saadawi, but she eventually agrees to tell the story of her life.

As a child, Firdaus lives with her parents. She receives pleasure from Mohammadain but stops feeling pleasure after her mother cuts off her clitoris, though Firdaus' uncle still touches her. Firdaus does not understand who she, her mother or father is. She often goes hungry while her father eats. After her father dies, her uncle puts her in elementary school, and he takes her to live with him in Cairo after her mother dies. Firdaus likes school, and after she receives her primary school certificate, a strange thing happens to her as pleasure reawakens in her body. When her uncle marries, she is sent to the boarding section of the school, and she likes school and dreams about her hopes for the future. In her despair one night, she is comforted by and falls in love with Miss Iqbal, but she never sees her after receiving her secondary school certificate and returning to live with her uncle.

Firdaus' uncle's wife convinces him to marry Firdaus off to Sheikh Mahmoud, an old man who beats Firdaus. When Firdaus runs away from Sheikh Mahmoud, she lives peacefully and happily with Bayoumi until he begins to beat her and locks her up in his flat so that he and his friends can use her sexually. After escaping from Bayoumi, Firdaus is taken in by Sharifa Salah el Dine who acts as her pimp until Fawzy, a client, wants to marry Firdaus and beats and rapes Sharifa when she refuses. Seeing this, Firdaus runs away yet again, but now, she gets her own apartment and prospers financially as a prostitute until Di'aa tells her that she is not a respectable woman. She gets a job at a big industrial operation where she has an affair and falls in love with Ibrahim, but she returns to prostitution when she learns that Ibrahim is engaged to the chairman's daughter.

Firdaus learns the truth: that all women are victims of deception, but prostitutes are less deceived than other women. She chooses the men she will bed and becomes very successful, being paid the highest price. This changes when Marzouk, a pimp, forces Firdaus to pay him most of her earnings in exchange for protection, though he beats and rapes her. When he tries to prevent Firdaus from leaving, Firdaus stabs Marzouk. After bedding an Arab prince, Firdaus confesses to killing a man, and she is imprisoned and sentenced to death because she knows the truth and is free because she no longer wants, hopes or fears anything. The journey to a place unknown to the world fills Firdaus with pride. After she finishes her story about her life, she is taken to her execution. As Nawal El Saadawi returns to her car, she sees the lies and hypocrisy of the world. Although she wants to stamp it all out, she is too frightened, and she realizes that Firdaus has more courage than she does.

More summaries and resources for teaching or studying Woman at Point Zero.