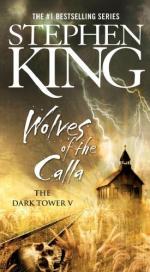 Stephen King
This Study Guide consists of approximately 54 pages of chapter summaries, quotes, character analysis, themes, and more - everything you need to sharpen your knowledge of Wolves of the Calla.

Wolves of the Calla Summary & Study Guide includes comprehensive information and analysis to help you understand the book. This study guide contains the following sections:

This detailed literature summary also contains Topics for Discussion on Wolves of the Calla by Stephen King.

Wolves of the Calla is the fifth novel in the Dark Tower series by Stephen King. In this novel, Roland and his ka-tet, Eddie, Susannah, and Jake, are following the Path of the Beam in their quest to find the Dark Tower when they are met by a group of people from a nearby community called Calla Bryn Sturgis. These people have been plagued by what they call Wolves for many generations. The Wolves come to their community and steal one child from every set of twins born in the community, only to return them weeks later with brain damage and a tendency to grow to giant size. Some people in the community want to stand up against these Wolves for the first time and are eager to enlist the gunslinger's assistance. At the same time, Eddie has made the ka-tet aware of a potential problem for a rose that exists in 1970s Manhattan that is somehow connected to the Dark Tower. Roland, too, has discovered a problem with Susannah that he has chosen not to tell anyone, including her husband. Wolves of the Calla is a continuation of Roland's quest for the Dark Tower that sidelines the ka-tet and leaves the reader anxious to see if they can survive yet another set of travails.

Roland and his ka-tet have been traveling for a while, following a road that happens to follow the Path of the Beam. Roland becomes aware of a group of people following them, but he is not concerned about them because he does not sense any malice in them. The night before this group of people finally approaches Roland and his ka-tet, Eddie and Jake experience todash, a way of being transported to another world without actually being a part of that world. Jake and Eddie todash to Manhattan on the same day Jake first died in the 1970s. Eddie and Jake follow 1970s Jake into the book store where Jake bought Charlie and the Choo-Choo as well as a riddle book. While there, Eddie and Jake watch as a group of mobsters Eddie is familiar with harass the store owner, Calvin Tower, over an agreement to sell a vacant lot to Sombra Real Estate. At the same time, Roland wakes in the night to find that Susannah has taken on the personality of a woman who calls herself Mia and is in the swamp, feeding.

The next morning, Roland, Eddie, Jake, and Susannah discuss Eddie and Jake's experience and what they saw in the bookstore. A short time later, a man from the group that has been following them introduces himself. This man, Father Callahan, tells them that the people of Calla Bryn Sturgis would like to employ their services as gunslingers. Eddie is surprised to discover that Father Callahan is from their world. Father Callahan promises he will tell them his story and how he came to be in Calla Bryn Sturgis, but first he wants Roland to promise that he will take from him a magic ball that has been hidden inside his church for several years. Roland promises.

Roland and his ka-tet meet the other members of Father Callahan's group and discuss the Wolves that have been stealing children from the people of the Calla for many generations. Roland discusses the situation with his ka-tet and they agree that they have no choice but to honor the gunslinger tradition and help these people, even if some of them do not want their help. That night, the entire ka-tet goes todash and returns to Manhattan where they visit the vacant lot Calvin Tower owns and see the rose that grows there. The rose is somehow connected to the Dark Tower and the entire ka-tet agree they must do whatever they can to protect it. Eddie suggests a scheme in which they would offer to buy the vacant lot.

Roland and his ka-tet travel to Calla Bryn Sturgis and begin getting to know the people there while making plans to fight the Wolves on their behalf. At the same time, Roland tells Eddie that he believes Susannah is pregnant with the child of a demon and that she has created a new personality called Mia in order to deal with the unpleasantness of this pregnancy. Eddie promises to watch Susannah carefully for signs of this personality emerging as well as the progressing pregnancy. At the same time, Roland has Eddie, Susannah, and Jake get to know the people of the Calla. Eddie hears a story from an old man who claims to have fought the Wolves once and revealed what hides under their masks. Roland learns about a group of women in the Calla who throw plates in the tradition of the rice Queen the town's people honor. With all this information, Roland begins to devise a plan to fight the Wolves.

As Roland and his ka-tet get to know the town's people, Father Callahan tells them his story. Father Callahan was once a priest in a town called Salem's Lot. This town was besieged by vampires and Father Callahan escaped, but not before drinking the blood of a vampire. Father Callahan went to New York, where he discovered he could identify vampires and began killing them. Soon a group of people began searching for Callahan in order to stop him from killing vampires. Eventually this group of people caught up with Callahan and he jumped out of a window to escape sure death. Instead of dying, Callahan was transported to another world where he was given a magical ball and instructed to keep it until the day he met a gunslinger. Now Callahan gives this ball to Roland.

Eddie and Roland go to a cave with Black Thirteen, the magic ball Callahan gave Roland, and use it to open a door there that will take Eddie back to Manhattan. Eddie convinces Calvin Tower to sell him his vacant lot, but not before Calvin Tower insists that Eddie push his precious collection of rare books through the door. At the same time, Jake wakes in the middle of the night to see his friend, Benny's father, speaking to the local robot and then sneaking off into Thunderclap. Jake is suspicious because everyone in the Calla is afraid of Thunderclap because that is where the Wolves live. A few days later, Jake follows the path he saw Benny's father take and discovers that Benny's father has been communicating with the people who send the Wolves.

Susannah soon realizes that she is pregnant and she approaches the subject with the other members of her ka-tet. They tell Susannah about Mia and warn her to let them know if she ever feels Mia coming out. Susannah promises, but she breaks this promise when labor begins at the same time they are preparing to fight the Wolves. Susannah makes a deal with Mia, telling her she will help with the birth of the demon child if Mia will hold off until after the fight with the Wolves. The fight with the Wolves is less dramatic than the people of the Calla expected it to be, ending in mere minutes with the deaths of all the robotic Wolves that have been stalking them for generation after generation. When all is said and done, two people are dead, but all the children are saved.

During the celebration, Roland and his ka-tet become aware that Susannah is missing. They follow her tracks and find that Susannah has gone through the Unfound Door and taken Black Thirteen with her. It appears that there is no way to follow her. However, Roland shows everyone a book he found among Calvin Tower's rare books that he believes might allow them to open the door once more. This book is called Salem's Lot and it tells Father Callahan's story in vivid detail. Callahan is shocked by this, but Roland and his ka-tet, especially Eddie, are more focused on finding a way to open the door and rescue Susannah.

More summaries and resources for teaching or studying Wolves of the Calla.

Wolves of the Calla from BookRags. (c)2022 BookRags, Inc. All rights reserved.