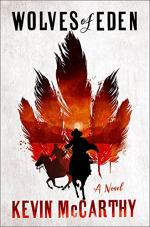 Kevin McCarthy
This Study Guide consists of approximately 59 pages of chapter summaries, quotes, character analysis, themes, and more - everything you need to sharpen your knowledge of Wolves of Eden.

This detailed literature summary also contains Quotes and a Free Quiz on Wolves of Eden by Kevin McCarthy.

The following version of this book was used to create the guide: McCarthy, Kevin. Wolves of Eden. W.W. Norton & Company, Inc., 2019.

Wolves of Eden is divided into 49 chapters spread over three larger sections, each beginning with an excerpt from another literary work. The novel takes place in 1866 during the aftermath of the American Civil War. The action is split between two or more narratives, generally either following Captain Molloy and Sergeant Kohn as they investigate a triple murder, or following Michael O’Driscoll as he writes an account from jail of the several months leading to the present. The primary setting of the novel is Fort Phil Kearny in the Dakota Territory, though events take place at various locations on the Bozeman Trail.

During the first section of the novel, Captain Molloy awakes from a drunken stupor to attend a meeting with his superior officer, General Cooke. Cooke tells him to make his way to Fort Phil Kearny to investigate a triple murder. In return, Molloy can have his pick of regiment to join. Molloy, his orderly Daniel Kohn, a Pawnee scout named Jonathan, and a private named Rawson all set out on the trail. Along the way they encounter a wagon train of Mennonites being tormented by Sioux Indians, and drive the Indians away. The Mennonites refuse to help them in return, however, claiming they are pacifists and cannot aid soldiers. Kohn advises them to turn around, as they will not make their destination with their cattle missing from the Indian attack.

That night, Kohn hears a gunshot from the Mennonite camp and wakes Molloy. Molloy, having been drinking, attempts to mount his horse but falls off, shattering his leg. Kohn assures that the Mennonites are unharmed before returning to Molloy, and Jonathan makes a poultice for the wound before setting the bone. The remainder of their trip to Fort Phil Kearny takes six days as Molloy’s stretcher slows their progress.

Interspersed with Molloy’s narrative is Michael’s account of his and his brother’s past leading up to the triple murder of which he stands accused. He begins by recounting that he and his brother took work as farm hands after the Civil War, but were unable to find steady work because farmers preferred hiring black laborers whom they could pay less. After some time trying to find work, the brothers decide to reenlist in the army. They choose to take the name O’Driscoll this time around in order to escape a past incident in the Army. Tom had taken a musket ball to the mouth during a battle at Chickamauga, and while Michael was tending to him they were both almost arrested for deserting until Molloy stepped in and freed them. The newly named O’Driscoll brothers first meet the sutler, who later becomes a victim of murder and the object of investigation, as he tries to sell them twice the provisions they need in order to share the profits with a Sergeant named Nevin. They both refuse and manage to get on Nevin’s good side despite escaping his scheme.

As Molloy heals in the hospital barracks of Fort Phil Kearny, Kohn takes over the investigation into the triple murder himself. He quickly discovers that a Native American prostitute named Sarah was present the night of the killings, and also finds out about the existence of a series of ledger books belonging to the late sutler containing the debts owed him by the soldiers around the fort. Kohn goes to visit the head officer of the fort, named Colonel Carrington, to obtain permission to proceed, then goes to Carrington’s quarters in order to speak to Sarah who now works for Carrington’s wife as a maid. He learns little from her, however, and one day is visited while sleeping by two anonymous soldiers who tell him that the ledgers are in the possession of the fort’s blacksmith, named Ezekiel Sweetman.

Meanwhile, Michael’s account continues the brothers’ eventual journey to Fort Phil Kearny. They stop at Fort Leavenworth along the way, where the two become mounted infantry alongside a Captain named Brown. They then proceed to Fort Phil Kearny, and along the way Tom meets Sarah for the first time and falls in love with her. They finally arrive at the site for Fort Phil Kearny and begin building, and experience skirmishes with the Sioux on a near daily basis. Tom frequently visits the sutler’s tavern where Sarah works. They also make the acquaintance of a young photographer named Ridgeway Glover, who while not part of the army nonetheless travels with them and becomes their close friend. Michael, his brother, and the other soldiers become more wild and fierce as time goes on and they experience more combat with the Sioux.

Kohn continues his investigation of the murder, eventually reclaiming the ledger books from the blacksmith by force after he refuses to sell them. Within the books Kohn notes the exceptionally large debt of Thomas O’Driscoll, who spend a lot of time with Sarah. Convinced the overwhelming debt owed to the sutler constitutes proof of the murder, Kohn wishes to arrest him. Molloy, now awake, remains unconvinced and first demands they go and see another prostitute by the name of Two Doves as well as Ridgeway Glover. Kohn, however, eventually rides out of the Fort to the logging camp where the O’Driscoll’s work and attempts to arrest them both. During the discussion, however, a group of Sioux descend upon camp and attempt to steal cattle, and during the skirmish Ridgeway Glover is killed and mutilated. Distraught, Michael surrenders himself to Kohn.

Michael’s account describes the night of the triple murder. Sergeant Nevin is killed by the Sioux, and in an act of revenge a group of soldiers set out to massacre a nearby camp of friendly Indians. Carrington and the other senior staff ride out to stop them, however, and Michael and Tom manage to escape without detection to the sutler’s tavern. They pass the night there in peace until the sutler’s wife slaps Sarah in the face, causing Tom to grab her by the throat. The sutler’s bodyguard makes a move to stop him and Michael shoots him dead, then Tom kills the sutler himself. Sarah and the other prostitutes then stab the sutler’s wife. It is at this point in the novel that Michael’s and Kohn’s narratives converge.

With Michael now in custody, Kohn attempts to extract a confession but Michael wishes to speak only to Molloy, who once saved him and Tom at Chickamauga. Tom, meanwhile, hides at the logging camp to escape Kohn’s investigation. One night, Sarah comes to him in his hiding place and the two escape together. The next day, Molloy talks with Michael and expresses the belief that he did nothing wrong in killing the sutler, when the alarm raises in the fort for every available man to fight an approaching Sioux war party. Michael and Kohn both go to fight and, being vastly outnumbered, are presumably killed on the field of battle. Molloy, still injured and dying due to liver failure from drinking, pays Jonathan a final visit as the soldiers are massacred by the Sioux on the nearby battlefield.

More summaries and resources for teaching or studying Wolves of Eden.