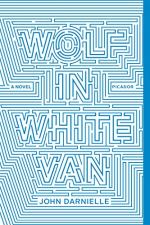 This Study Guide consists of approximately 57 pages of chapter summaries, quotes, character analysis, themes, and more - everything you need to sharpen your knowledge of Wolf in White Van.

This detailed literature summary also contains Quotes and a Free Quiz on Wolf in White Van by .

In a fragmented narrative style that frequently and unpredictably moves backwards and forwards between past and present, between reality and invention, narrator and protagonist Sean contemplates two key events in his life. The nature of those events, as well as their causes and consequences, are all slowly revealed over the course of the story: piece by piece, bit by bit, connection by connection. Eventually, Sean is forced into confrontations with significant personal truths, avoiding one truth in particular until the novel’s very last words.

Exploration and/or narration of those truths begin with references to an “accident”, which occurred when Sean was a teenager and which, the reader learns, left him with a frighteningly disfigured face, and also a court case. That case investigates the possibility of Sean being declared in some way responsible for the death of a participant in a role-playing game he designed and ran. As exploration of these two truths continues and deepens, the narrative reveals that the game, “Trace Italian”, was invented by Sean when he was first in the hospital recovering from his “accident”; developed during his long months and years of recovery; and finally turned into a profitable business, from which he (in the present) makes his living.

Narration eventually reveals the nature and purpose of the court case: a pre-trial hearing of a potential lawsuit being brought against Sean by the parents of a young woman who, along with her boyfriend, played Trace Italian with an intensity that bordered on obsession – gameplay that eventually resulted in the young woman’s death. Even as a judge decides that there are no grounds for such a lawsuit, Sean (in narration) spends a great deal of time contemplating / remembering the game’s development, and asking himself how much, if any, responsibility he has to bear in relationship to the young woman’s death.

At the same time, and in parallel / interconnected narrative, Sean explores and comments on the circumstances before, during, and after the accident. These include his experiences in the hospital; his experiences being brought home to recover; and his experiences in the aftermath of both accident and recovery as he, his parents, and the world in general become accustomed to who Sean has become, what he looks like, and how he now interacts with the world.

Chance encounters with friends, including an ex-girlfriend, lead Sean to further contemplations of what happened (in terms of both the game and the accident), and of his responsibility in both areas. As he, like the court, comes to the conclusion that ultimately, he had no responsibility for what happened to the dead game-player, he also comes to the conclusion (never actually verbalized, but nonetheless very clear) that he has to face the truth about “the accident”.

In the novel’s final chapter, that truth is revealed: in an extended flashback, narration describes how, one night, after spending time with friends and making out with his almost girlfriend, a discontented Sean went home; talked with his mother (who attempted to understand why he was being so moody); stole his father’s shotgun from a closet; momentarily contemplated shooting both his parents; changed his mind; and took the gun into his bedroom, where he placed it so that when it fired, it would blow his head off.

And there, the novel ends.

More summaries and resources for teaching or studying Wolf in White Van.