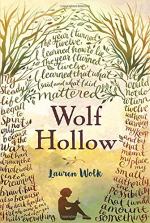 Related Topics
Beyond the Bright Sea

Lauren Wolk
This Study Guide consists of approximately 44 pages of chapter summaries, quotes, character analysis, themes, and more - everything you need to sharpen your knowledge of Wolf Hollow.

Wolk’s children’s novel revolves around twelve year-old Annabelle as she attempts to deal with a local bully named Betty while defending local recluse and World War I veteran Toby against lies and accusations of violence during World War II. Annabelle lives with her parents, grandparents, Aunt Lily, and younger brothers James and Henry on a farm in the hills above the small town of Wolf Hollow, Pennsylvania. They are a close family and Annabelle is especially close to her parents. Annabelle befriends Toby, who lives in an abandoned smokehouse at the edge of their property. Toby is quiet, keeps to himself, enjoys photography, always carries three guns, and causes no one any trouble. Annabelle’s parents know he is a good but troubled man. Annabelle loves her life, but the fourteen year old Betty throws her life out of order.

For unknown reasons, Betty’s father is no longer in her life (it is believed he is dead). Unable to handle her daughter, Betty’s mother sent Betty to live with Betty’s grandparents, the Glengarrys, above Wolf Hollow. Betty enjoys harassing other kids, but especially comes to delight in torturing Annabelle because they live so close to one another. Most of Betty’s confrontations occur in the woods on the way to school, where Betty beats Annabelle with a stick when Annabelle refuses to give in to her demands that Annabelle give her something valuable. When Toby comes to Annabelle’s defense, Betty is only angered further. Betty begins spending time with a local boy named Andy. The two often skip school together. One day, Annabelle and her friend Ruth talk with an apple farmer named Mr. Faas who is on his way to market outside of their school. Someone throws a rock crushes Ruth’s eye. The attack, supposedly accidental, is believed to have been directed at Faas due to anti-German sentiments. Betty and Andy blame Toby, as a World War I veteran, and claim to have seen Toby from the school belfry.

When Betty and Andy tie a sharpened wire across the path in the woods and injure Henry, Annabelle has had enough and tells her parents. Her parents confront Betty and the Glengarrys, but Betty blames everything on Toby. Annbelle’s parents are not convinced. Further doubt is cast when it is discovered that the door to the belfry is locked. Consequently, Betty and Andy could not have seen the rock attack. When Betty suddenly goes missing a short time later, Toby is once again blamed. Annabelle sneaks Toby into the family barn and provides him with clothing, food, water, and reading material while search parties form to find Betty. With a haircut and a beard trim, Toby looks like a totally different person. Toby reveals that it was indeed Betty who threw the rock that hit Ruth and that he had nothing to do with Betty’s disappearance. He also explains to Annabelle many of the horrors he witnessed during World War I –horrors which left him lonely, depressed, and a drifter. Andy confesses that he and Betty had planned to go down to cause Toby some trouble, but that with the rain, Andy figured Betty would not have gone and so did not go either. Annabelle comes to realize that the only place Betty could be is in the old well by the smokehouse, and tells her father this.

Annabelle’s father and the other members of the search party find Betty at the smokehouse. Toby, in disguise, joins the search party and volunteers to be the one to be lowered into the well to bring out Betty. It is apparent Betty fell into the well while not paying attention, but later, in the hospital, she blames Toby. Betty dies a short time later due to infection. A search party is formed for Toby. Toby has had enough harassment and heartache, and so leaves and heads west toward Ohio. Just before the border, the searchers catch him. Believing he intends to fight because of the guns he carries, Toby is shot to death. The news devastates Annabelle and her family. Annabelle’s mother believes that Toby intentionally had himself killed, because he was so tired of living. The family buries Toby, who has no family of his own, on their land. Annabelle visits the grave for years afterward, having learned many important lessons from that year in her life.

More summaries and resources for teaching or studying Wolf Hollow .