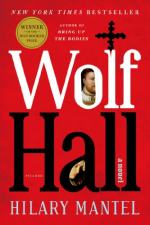 Hilary Mantel
This Study Guide consists of approximately 38 pages of chapter summaries, quotes, character analysis, themes, and more - everything you need to sharpen your knowledge of Wolf Hall.

“Wolf Hall” is a historical novel by Hilary Mantel which recounts the life of Thomas Cromwell through the mid-1530s when Henry VIII seeks to annul his own marriage to Queen Katherine in order to marry Ann Boleyn, daughter of diplomat Thomas Boleyn. When the novel begins, English native Thomas Cromwell is just a child who is routinely and savagely beaten by his father, Walter, a blacksmith and brewer. Young Thomas then runs away to continental Europe, where he serves as a mercenary soldier in the French army, and later trains in Italian banking. He returns to England to practice law, and secures Cardinal Wolsey as his patron. Cromwell begins to work exclusively for Wolsey, and it is through Wolsey – who has the ear of King Henry VIII – that Cromwell learns the king is worried about producing a male heir, and seeks to annul his marriage to Queen Katherine to marry Anne Boleyn.

Cromwell grows in stature and prestige under Wolsey’s wing. Wolsey himself, however, is tasked with a seemingly insurmountable job: annul the king’s marriage. Wolsey attempts to work through channels to secure the annulment, but has little success. The Catholic Church looks upon marriage as a sacred, inviolable contract and institution. As such, the Catholic Church officially defends Katherine and her position as Queen. Wolsey’s failure is too much for Anne Boleyn to handle. Anne Boleyn, turns the king against Wolsey slowly but steadily, and this leads to Wolsey’s downfall on trumped-up charges of treason. Despite Wolsey’s fall from grace, Cromwell defends Wolsey without hesitation.

Cromwell’s loyalty to Wolsey until Wolsey dies of illness while under arrest earns the king’s respect, and by the 1530s, Cromwell has become indispensable to the king in all matters. Cromwell advises the king on all manner of things, from domestic to foreign policy. Cromwell is among those who establish the idea that the king has jurisdiction over the Catholic Church in England, and not the Pope, for the king is legally entitled to rule over all within the extent of his own lands. As such, the king can annul his own marriage with the rewriting of laws. Henry, Cromwell, and their circle thus commit to reordering church-state relations, combining them.

This outrages nearly all of the Christian world, including the king’s own Chancellor, Thomas More. More protests how Henry is treating the Catholic Church every step of the way, and is later executed for refusing to sign onto the Act of Supremacy, giving the king immense religious powers. Henry soon after has annulled his marriage to Katherine and has remarried to Anne. Anne, however, has failed to produce a male heir after several attempts, which displeases the king immensely. This does not bode well for Anne. At the end of the novel, Cromwell plans the summer and autumn journeys of the king’s court, including a five day sojourn which will be spent at Wolf’s Hall, the residence of the Seymour family, of which daughter Jane has caught the already-wandering eye of the king.

More summaries and resources for teaching or studying Wolf Hall.