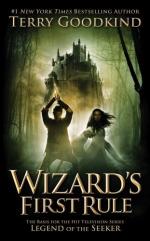 Terry Goodkind
This Study Guide consists of approximately 50 pages of chapter summaries, quotes, character analysis, themes, and more - everything you need to sharpen your knowledge of Wizard's First Rule.

Wizard's First Rule is the quest story of young Richard Cypher, who must find three magic boxes mentioned in a secret book of his father's. If he does not, the evil lord Darken Rahl will gain power over the living and the underworld, plunging the world into a reign of terror. Along the way Richard must outsmart an evil queen, a tribe of cannibals and a witch woman, as well as several magical beasts. He is aided by Kahlan, a beautiful but mysterious stranger, his wise elderly friend Zedd and his ally Chase, a huge, fierce boundary warden.

After his father's brutal murder, Richard searches for clues to the killer. He happens to meet a beautiful young woman being pursued by three men in the forest. Richard helps Kahlan hide from the men and when they are attacked the two youths kill the four brawny men. Richard takes Kahlan to meet his elderly friend Zedd. Kahlan recognizes Zedd as the great wizard for whom she has been searching. Zedd realizes that Kahlan is a powerful Confessor and he names Richard Seeker of the Truth. They must stop the evil Darken Rahl from gathering all three of the boxes of Orden and opening the one that will give him power over everything living and dead, for good or evil.

The trio visit Richard's friend Chase, who agrees to take them through a pass in the boundary to The Midlands. On the way, Chase and Zedd are injured, so Kahlan and Richard trek through the pass in the boundary alone. In The Midlands, they are accepted into the tribe of the Mud People. A council of seers sends them to Shota the witch woman, who tells Richard that Queen Milena has the final box of Orden, but will not have it long.

Kahlan and Richard, accompanied by wizard Zedd, travel to Queen Milena's castle in Tamarang, encountering a young orphan named Rachel along the way. There, they learn that the wizard Giller has sacrificed his life to save the box from Darken Rahl. After leaving, they encounter Chase with Rachel, and learn that the little girl has the third box of Orden hidden in a loaf of bread. They rush the box to the protection of an army headed by Richard's brother Michael.

Richard is captured by a Mord-Sith and horribly tortured. He tells Darken Rahl that the Book of Counted Shadows, the guide to opening the boxes of Orden, has been destroyed. However, Richard admits that he has memorized the contents of the book. To save Kahlan's life, Richard decides to help the evil Darken Rahl gain dominion over all things, living and dead. At the last minute, Richard leaves out a crucial paragraph of the book, resulting in Rahl's death. Richard becomes Rahl, ruler of all three lands. His love for Kahlan makes him immune to her Confessor powers and they ride a red dragon away to return the boy Siddin to his people and consummate their relationship.