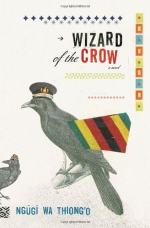 Related Topics
A Grain of Wheat
Petals of Blood
The Martyr
The River Between
Weep Not, Child

Ngũgĩ wa Thiong'o
This Study Guide consists of approximately 88 pages of chapter summaries, quotes, character analysis, themes, and more - everything you need to sharpen your knowledge of Wizard of the Crow.

Wizard of the Crow Summary & Study Guide includes comprehensive information and analysis to help you understand the book. This study guide contains the following sections:

This detailed literature summary also contains Quotes and a Free Quiz on Wizard of the Crow by Ngũgĩ wa Thiong'o.

The following version of this book was used to create the guide: Ngũgĩ wa Thiong'o. Wizard of the Crow. Anchor Books, 2006.

This long novel, broken into six books, tells the story of an African nation called Aburiria and the people who struggle to gain power over it. Book One: Power Daemons introduces the reader to the unnamed Ruler, who has held power for decades but is now sick with a mysterious illness. At a national ceremony, the Ruler announces the new Marching to Heaven project, which involves building a skyscraper so high that he will be able to communicate directly with God. The Ruler plans to ask the Global Bank for a loan to finance its construction. His power-hungry ministers Machokali and Sikiokuu are present, as is the artist John Kaniuru, who created the image of the Marching to Heaven project. A protest by the anti-government Movement for the Voice of the People interrupts the announcement.

Later, Kamiti, a poor man out of a job and the novel’s protagonist, goes to the Eldares Construction Company. There, the CEO, Titus Tajirika, brutally humiliates him and turns him away. Tajirika is eventually announced as the Chairman for Marching to Heaven. Kamiti meets the secretary, Nyawira, and they talk briefly about their pasts. Later, the Global Bank arrives to the Hotel Paradise. Kamiti, who is there to beg for money, is swept up in another protest by the Movement for the Voice of the People. He flees, running into Nyawira. To scare away two police officers who follow them, he poses as the Wizard of the Crow, a powerful sorcerer.

The long, seemingly endless queue that had begun to form outside Eldares Construction Company relocates to the front of Nyawira’s house, which has become the shrine for the Wizard of the Crow. One day, Tajirika’s wife, Vinjinia, takes him to consult the Wizard of the Crow. He is diagnosed with “white-ache”: a longing for white skin. The Wizard of the Crow, who has confiscated three bags of money from Tajirika, buries them in the backyard, repulsed by the sight and smell of it. Overwhelmed by the number of clients he has and their greed, Kamiti runs away to the forest. After orchestrating another protest at the dedication ceremony for Marching to Heaven and being subsequently identified by the police, Nyawira also flees to the forest. They make love.

The Ruler hears that the Global Bank has not decided to give Aburiria its loan for Marching to Heaven; they ask for the Ruler to make adjustments that would make the project more viable. The Ruler arranges to go to New York to see the Global Bank directly. Kamiti goes to see his parents and Nyawira takes over as Wizard of the Crow. Kamiti is taken in by the government for questioning, where he is held alongside Tajirika. Tajirika blames the Wizard of the Crow for all his troubles. The Wizard of the Crow is requested to come to New York, where the Ruler has fallen ill.

Meanwhile, Tajirika’s wife enlists Nyawira’s help to get her husband to stop beating her. When the Wizard of the Crow arrives in New York, he discovers that the Ruler has mysteriously begun to swell. The Ruler is unable to speak to the Global Bank and makes plans to return home. Kamiti also returns to Aburiria, leaving a note behind for Machokali that spreads the rumor that the Ruler is pregnant. An American envoy arrives in Aburiria and pressures the Ruler both to abdicate the presidency and to transition Aburiria to democracy. Initially incensed by the rumors of his pregnancy, the Ruler repurposes the rumor to claim that he has given birth to “Baby D” (698), as he calls it, or democracy. Machokali has also disappeared; it is implied that he has been assassinated.

Kamiti and Nyawira make plans to get married. The Global Bank rejects the loan application entirely. The novel ends with Nyawira spotting A.G., one of the Ruler’s former police officers, telling the story of the Wizard of the Crow. She thanks him for helping save Kamiti from Kaniuru.

More summaries and resources for teaching or studying Wizard of the Crow.

Wizard of the Crow from BookRags. (c)2022 BookRags, Inc. All rights reserved.