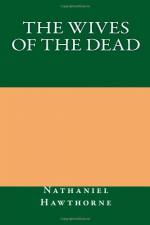 Nathaniel Hawthorne
This Study Guide consists of approximately 40 pages of chapter summaries, quotes, character analysis, themes, and more - everything you need to sharpen your knowledge of The Wives of the Dead.

Hawthorne's first collection of stories, Twice-Told Tales, was originally published in 1837, then reprinted in 1841 and 1851. The best text of Hawthorne's Twice-Told Tales is that published as Volume IX of the Centenary Edition of the Complete Works of Nathaniel Hawthorne, edited by J. Donald Crowley, 1974.

Hawthorne's 1852 collection, "The Snow Image" and Other Twice-Told Tales, contains some of his best-known short stories, including "My Kinsman, Major Molineux," "Ethan Brand," and "The Wives of the Dead."

Harry Levin's acclaimed 1967 study, The Power of Blackness: Hawthorne, Poe, Melville, argues that the tradition of American fiction lay not in the realistic novel of man in society but in the romance, a form which uses methods and materials of folklore, fable, myth, and allegory to explore what Hawthorne called the "truth of the human heart."

More summaries and resources for teaching or studying The Wives of the Dead.

The Wives of the Dead from Gale. ©2005-2006 Thomson Gale, a part of the Thomson Corporation. All rights reserved.