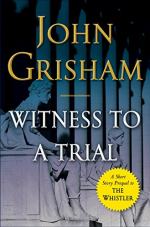 John Grisham
This Study Guide consists of approximately 33 pages of chapter summaries, quotes, character analysis, themes, and more - everything you need to sharpen your knowledge of Witness to a Trial.

Witness to a Trial Summary & Study Guide includes comprehensive information and analysis to help you understand the book. This study guide contains the following sections:

This detailed literature summary also contains Quotes and a Free Quiz on Witness to a Trial by John Grisham.

The following version of the novel was used to create this study guide: Grisham, John. “Witness to a Trial.” Doubleday, September 27, 2016. Kindle.

In the short story, “Witness to a Trial” by John Grisham, Delgado, a career criminal watched with glee as an innocent man was found guilty of the murders he had committed. Junior Mace knew that he had been framed for the murders of his wife and best friend because he spoke out against the construction of a casino on the Tappacola Indian reservation but had no proof. Benefiting Delgado’s plan to frame Junior were the incompetent police in Brunswick County, the prosecutor who wants bragging rights for winning a murder trial, and the defense lawyer who admits his own incompetence in defending Junior.

Grisham follows the course of the trial in his short story beginning with the testimonies of the sheriff and deputy in Brunswick County who investigated the crime. It is indicated that neither of these law enforcement officers had a good deal of experience in investigating murders. Willard, the homicide detective who investigates the case, takes evidence from Junior’s truck without having secured a search warrant first. Although the lack of a search warrant would have generally led to that evidence being inadmissible in court, the evidence is admitted, indicating that there is some wrongdoing going on in the trial.

When the bartender who served Junior is testifying, the owner of the bar watches the testimony from the gallery to make sure that the bartender stays on script. The reader eventually learns that Junior was framed for the murder because he campaigned against the construction of a casino on the Tappacola reservation. Delgado, the career criminal who actually committed both of the murders, watched the trial with glee as he realized he had put together the perfect crime. He had no remorse as he watched Junior convicted for two murders he did not commit.

More summaries and resources for teaching or studying Witness to a Trial.

Witness to a Trial from BookRags. (c)2022 BookRags, Inc. All rights reserved.