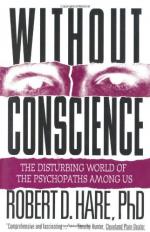 Without Conscience: The Disturbing World of the Psychopaths Among Us Themes

Robert Hare (psychologist)
This Study Guide consists of approximately 28 pages of chapter summaries, quotes, character analysis, themes, and more - everything you need to sharpen your knowledge of Without Conscience.

This is perhaps the most important theme in the entire book. Hare spends over half of the book emphasizing the importance of correct diagnoses and evaluation of psychopathy. The development and evolution of the Psychopathy Checklist is the first step in finding a scientific, valid tool in which to measure psychopathy.

Some of the characteristics that Hare outlines are very interesting because they seem like "normal" social behaviors that many people experience at one point in their life. For example, there might be a young teenage boy who in early adolescence displays behaviors of juvenile delinquency, but is able...

More summaries and resources for teaching or studying Without Conscience: The Disturbing World of the Psychopaths Among Us.

Without Conscience: The Disturbing World of the Psychopaths Among Us from BookRags. (c)2021 BookRags, Inc. All rights reserved.