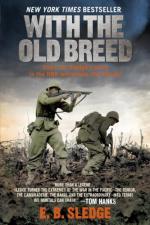 Plot Summary
+Chapters Summary and Analysis
Chapter 1, Making of a Marine
Chapter 2, Preparation for Combat
Chapter 3, On to Peleliu
Chapter 4, Assault into Hell
Chapter 5, Another Amphibious Assault
Chapter 6, Brave Men Lost
Chapter 7, Rest and Rehabilitation and Chapter 8, Prelude to Invasion
Chapter 9, Stay of Execution
Chapter 10, Into the Abyss
Chapter 11, Of Shock and Shells
Chapter 12, Of Mud and Maggots
Chapter 13, Breakthrough
Chapter 14, Beyond Shuri
Chapter 15, End of the Agony
Free Quiz
Characters
Objects/Places
Themes
Style
Quotes
Topics for Discussion
Order our With the Old Breed, at Peleliu and Okinawa Study Guide

With the Old Breed, at Peleliu and Okinawa Summary & Study Guide

E. B. Sledge
This Study Guide consists of approximately 43 pages of chapter summaries, quotes, character analysis, themes, and more - everything you need to sharpen your knowledge of With the Old Breed, at Peleliu and Okinawa.

With the Old Breed, at Peleliu and Okinawa Summary & Study Guide Description

With the Old Breed, at Peleliu and Okinawa Summary & Study Guide includes comprehensive information and analysis to help you understand the book. This study guide contains the following sections:

This detailed literature summary also contains Topics for Discussion and a Free Quiz on With the Old Breed, at Peleliu and Okinawa by E. B. Sledge.

E.B. Sledge writes his personal memoir of marine infantry combat operations in the Pacific theater during World War II. The text commences with Sledge's induction into the marines, follows his training through boot camp and infantry school, and describes his pre-combat deployment to Pavuvu. Sledge then recalls his days in combat, assigned as an assistant gunner on a 60mm mortar, on Peleliu and Ngesebus, followed by a period of rest and retraining once again at Pavuvu. Sledge then recalls his second stint in combat during the assault and capture of Okinawa, followed by the end of the war and eventual demobilization. Special emphasis is placed on the mental and moral aspects of warfare.

As a personal memoir, the text is properly concerned less with overarching strategy and more with personal experience. Periodic textual segments are inserted to align personal memories with larger world events—these segments are presented in italic typeface and orient the events of the book in a larger historical framework. The book opens with Sledge's pre-enlistment life and examines his desire to enter the combat forces during World War II. After enlistment, Sledge explains how he came to be assigned to the marine infantry and examines his training experiences in boot camp and subsequently in infantry training. He selected service on the 60mm mortar and operated that weapon throughout his military experiences.

After months of physical and mental training, Sledge was deployed to the Pacific theater and assigned to the 1st Marine Division, 5th Regiment, 3rd Battalion, Company K—usually rendered in the text as K/3/5. K/3/5 is stationed at Pavuvu Island for an extended period of training in amphibious assault techniques and tactics. The 1st Marine Division then deploys for the amphibious assault on Peleliu, a largely forgotten but hotly contested island battle. The text then describes the physical and mental challenges of combat and relates many "war stories" and other events as the marines capture Peleliu and Ngesebus Islands. After about one month, the marines are triumphant and return to Pavuvu for several months of rest. They are reequipped and receive under-trained reinforcements.

Once again a period of training in amphibious assault techniques and tactics is pursued. The 1st Marine Division, with other marine and army divisions, then deploys for the amphibious assault on Okinawa, the devastating final large battle of World War II. The text again describes the physical and mental challenges of combat complicated by civilian refugees, massive prepared fortifications, and a dedicated defense to the death. After about two months in combat, the marines are triumphant. Days later, atomic bombs are dropped on Hiroshima and Nagasaki and Japan surrenders unconditionally. The text concludes with summary reflection and introspection.

More summaries and resources for teaching or studying With the Old Breed, at Peleliu and Okinawa.

With the Old Breed, at Peleliu and Okinawa from BookRags. (c)2022 BookRags, Inc. All rights reserved.