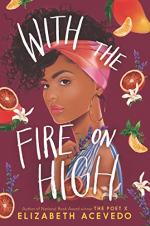 With the Fire on High Summary & Study Guide

Elizabeth Acevedo
This Study Guide consists of approximately 44 pages of chapter summaries, quotes, character analysis, themes, and more - everything you need to sharpen your knowledge of With the Fire on High.

With the Fire on High Summary & Study Guide Description

With the Fire on High Summary & Study Guide includes comprehensive information and analysis to help you understand the book. This study guide contains the following sections:

This detailed literature summary also contains Quotes and a Free Quiz on With the Fire on High by Elizabeth Acevedo.

The following version of this book was used to create the guide: Acevedo, Elizabeth. With the Fire on High. HarperTeen, 2019.

With the Fire on High follows the coming-of-age of Emoni Santiago, a teenaged mother who dreams of becoming a chef. Emoni's life is not easy; she is a senior in high school whose mother has passed away and whose father lives primarily in Puerto Rico. Fortunately her paternal grandmother, 'Buela, steps in to raise Emoni when she is young, and now she assist in raising two-year-old Emma, affectionately known as "Baby Girl." On the cusp of adulthood, Emoni is faced with many challenging decisions about her future. Her peers are in the process of applying to colleges, yet Emoni struggles to see how higher education would be possible given her responsibilities for Emma. The work follows Emoni through her senior year at Schomburg Charter, as she faces the typical adolescent challenges of navigating relationships, finding adult mentors, and making choices for the future.

Acevedo divides the work into three parts, each referencing culinary terms: Part One: The Sour, Part Two: The Savory, and Part Three: The Bittersweet. Each section opens up with a recipe that sets the tone for that section of the work, as well as alludes to Emoni's emotional state. As Part One begins Emoni prepares Emma for her first day of daycare as she returns to Schomburg for her final year of high school. Emoni's Advisor, Ms. Fuentes, informs Emoni of a senior elective in culinary arts and recommends she take it. However, the class culminates with a week long immersion mentorship in Spain. Early on, Acevedo establish the internal conflict Emoni experiences in terms of her responsibility to Emma and her responsibility to herself. With the encouragement of those closest to her, including her best friend Angelica, Emoni enrolls in the class.

In addition to adjusting to her last year of high school, Emoni is also navigating her co-parenting relationship with the baby's father, Tyrone. Tyrone pursued Emoni at a party when she was a freshman, and eventually won her over. Perhaps because of Emoni's naivety and inexperience, she becomes pregnant. During the pregnancy it becomes clear that Tyrone is a bit of a player. However, he has been punctual for visitation with Emma, and Emoni puts Emma first when dealing with Tyrone. Emoni's experience with Tyrone, as well as her father's abandonment, cause Emoni to be distrustful of males in general. Therefore, when the new student, Malachi Johnson, shows interest in her, Emoni rebuffs him.

Emoni consistently experiments in the kitchen and is told by others that her food is magical. She instinctively knows how to make creative, balanced dishes that can bring those who eat them tears. Yet when she meets her instructor Chef Ayden, she quickly realizes that he will be focusing on technical aspects of cooking rather than creative choices. When the class actually begins to cook, Emoni sneaks an extra ingredient into the recipe. Although this impresses Chef Ayden, he also scolds her for not following the recipe exactly. He has the other students taste it, and Emoni's pride soars. Yet when Emoni deigns to alter a recipe a second time, Chef Ayden refuses to even taste it, demanding she throw it into the trash. Devastated, Emoni begins to skip class.

Meanwhile, Emoni tries to navigate her relationships with her peers. Angelica, her loyal best friend, has requested Emoni create a dinner for her to share with her girlfriend, Laura. Malachi continues to show interest in Emoni, but a jealous classmate, Pretty Leslie, attempts to foil these advances by telling Malachi about Emma. However, Emoni shows no shame in her daughter and Malachi does not balk at the news. Instead, he asks Emoni out for ice cream and she accepts, if only to spite Pretty Leslie. Emoni makes it clear to Malachi she is not interested in a relationship, but he continues to stay in contact and is patient with Emoni. Malachi offers to help prepare the dinner for Angelica and Laura, and Emoni accepts the offer. Emoni nervously breaks a glass in the kitchen when Malachi touches her, and he respectfully backs away. However, Tyrone has gotten wind of Malachi's presence, and confronts Emoni about it. Despite her ire, Emoni checks her emotions and placates Tyrone, reminding him of their duties as parents.

Sensing something is wrong with Emoni, 'Buela takes her and Emma out for a fancy meal. Emoni marvels at the restaurant, and has the good fortune to meet the chef, who is female. Chef Williams knows Chef Ayden and tells Emoni she will learn a great deal from him. Contrite, Emoni returns to culinary arts class and asks Chef Ayden if she can come back to class. Chef Ayden agrees, but makes Emoni the primary on the fundraising efforts for the trip to Spain. Emoni creates a plan to launch a cafe in the school, and cater Winter Dinner. Both efforts succeed, but Emoni is still short on funds for the trip. Fortunately, Emoni's Aunt Sarah, her mother's older sister, sends her the funds. Emoni and Aunt Sarah exchange family recipes, and Emoni hopes to visit her some day.

The trip to Spain arrives and is all Emoni hoped it would be as she serves as a sous-chef for a gifted executive chef, Chef Amadi. She is afforded a free hand in her creations, and the customers love her dishes. Emoni and Malachi create a relationship that could best bet termed as intimate friends, holding hands and occasionally kissing. They explore Sevilla together, and learn about one another. Emoni returns home with a better idea of what she wants for her future and a deeper understanding of home.

Part Three addresses how Emoni will reconcile her future, as all of her peers’ plan to leave for college. She has been accepted to Drexel, but still has concerns over her ability to balance all of her responsibilities. Tyrone matures as well, and offers not only to take Emma for longer visitations, but also to help Emoni and Emma financially. Emoni's father Julio surprises her by returning to Philadelphia to attend the graduation ceremony. He too offers to help both financially and with Emma. Emoni decides to go to school part-time and approaches Chef Williams for a job. Emoni knows that she wants to remain in her own neighborhood, to cook for her people and be close to Emma. Additionally, she plans a trip to see her Aunt Sarah, to learn more about her mother's heritage. The value of place, particularly how it is reflected in Emoni's dishes, becomes manifest in Emoni and she is well on her way to meeting her goal of becoming an executive chef.

More summaries and resources for teaching or studying With the Fire on High.

With the Fire on High from BookRags. (c)2022 BookRags, Inc. All rights reserved.