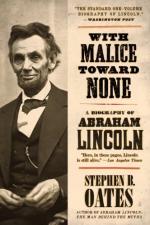 With Malice Toward None: The Life of Abraham Lincoln Summary & Study Guide

With Malice Toward None: The Life of Abraham Lincoln Summary & Study Guide Description

With Malice Toward None: The Life of Abraham Lincoln Summary & Study Guide includes comprehensive information and analysis to help you understand the book. This study guide contains the following sections:

This detailed literature summary also contains Topics for Discussion and a Free Quiz on With Malice Toward None: The Life of Abraham Lincoln by Stephen B. Oates.

The biography follows the life of Abraham Lincoln, the sixteenth President of the United States. Lincoln grew up modestly, in a tough homestead environment, receiving little formal education in childhood. His biological mother, Nancy Lincoln, was prone to melancholy, a trait young Abraham inherited. He had one sister, Sarah, and after Nancy died his father remarried Sally Johnston, who loved the two children as her own. Though his father wanted him to be a farmer, Lincoln struck out on his own when he was twenty-two to New Salem, a tough frontier town in Illinois. There he was involved in a couple of business ventures, and began his foray little by little into politics.

He was respected by the locals as an honest, straightforward man. When he was elected to the state senate Lincoln moved to Springfield, the capital of Illinois. He became a member of the Whig party and married Mary Todd, with whom he had three children: Robert Todd, Willie, and Tad, though Willie died in the White House at age eleven. When the Whig party folded, Lincoln became a Republican, as did many of his friends and colleagues. Though he ran many political races and failed, he won the Republican nomination and the Presidency in 1860 against his Democrat rival, Stephen A. Douglas. During his presidency the Civil War raged, and he was thrust in the middle of the conflict with little military experience and no generals who would rise to the occasion. Finally, after Generals Grant, Sheridan, and Sherman obeyed his orders, the Union armies began taking the offensive against the Confederates. Though General Lee of the rebel army fought well, the Union triumphed over the Confederacy.

Lincoln signed the Emancipation Proclamation, the thirteenth amendment to the Constitution, into law, freeing slaves in the United States. This caused major rifts throughout the Union: though many people believed slavery was wrong, racism was rampant and people did not believe blacks and whites could live in harmony, side by side. Lincoln was elected to a second term, which had not happened since President Jackson, and he began to adjust to the idea of a Presidency without war. He had plans to go home to Illinois with his family for a visit, and saw his life beyond war for the first time in four years. On the morning of his assassination, he awoke from a dream where the White House was in mourning for a President who had been killed. Little did he know, it was a self-fulfilling prophecy: the same evening he was assassinated by John Wilkes Booth at the Ford Theatre. Lincoln's funeral train went from Washington to Illinois, and was witnessed by thousands. He accomplished much in his war-torn presidency, and never caved in to any demands which would have compromised what he thought was right.

With Malice Toward None: The Life of Abraham Lincoln from BookRags. (c)2022 BookRags, Inc. All rights reserved.