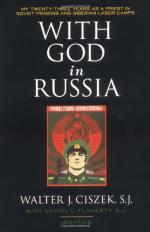 With God in Russia Summary & Study Guide includes comprehensive information and analysis to help you understand the book. This study guide contains the following sections:

This detailed literature summary also contains Topics for Discussion on With God in Russia by Walter J. Ciszek.

"With God in Russia" by Walter J. Ciszek is an autobiographical account of the author's fifteen years of incarceration as a Catholic Jesuit priest and political prisoner in the prisons and work camps of the Soviet Union during and after World War II. Ciszek tells the story of how as a God-loving person, he got himself into such a situation, how he withstood the brutality of this environment, and ultimately survived it.

Walter J. Ciszek was born and raised in Shenandoah, Pennsylvania, to immigrant Polish parents. His father, Martin, was a hardworking saloon keeper and his mother was a devout Catholic who took care of the religious upbringing of her children. The only thing that young Walter liked about school was the sports. He didn't do well scholastically and often played hookey. Things got so out of hand that Walter spent time in reform school. At that time, no one would have guessed that he would one day opt to become a Jesuit priest.

But that is exactly what happened. When Martin was told of his plans, he tried to dissuade him. But Mary was thrilled that her values were transferring to her prodigal son. It seemed that the extreme life of the Jesuit - one of devotion and isolation and sacrifice - was a lifestyle that Walter, the former delinquent, needed and even craved.

While going through the long process toward ordination as a Jesuit priest, Walter was inspired by an appeal from the Pope. He asked that young priests consider entering a training program in Rome that would be preparatory for work in godless Russia. There were millions of rudderless Catholics in the vast country in which religion was suppressed and oppressed. Russian Catholics were, in the main, without parish priests and denied the Mass and the Confessional. Walter was immediately intrigued and approved for the program. There were several years of training in Rome and his dispatch to Russia was put off more than once.

Unfortunately, when it was decided that he and other priests could begin their missionary work, Hitler would soon be invading Poland which was the sparked the onset of World War II. In order to infiltrate into the Russian culture, Ciszek and his associates took on false identities. Had they presented themselves as priests, they would have never gained access to the country. As the War escalated, Germany began attacking Russia from the air. Ciszek and his fellow clandestine priests had gotten jobs and were working their way into the Catholic community. But they were being watched. There were suspicions about the men. Why did these men come to Russia just to work in menial jobs and live a stark existence? That suspicion remained in the minds of the Soviets the entire time Ciszek was in Russia. As things heated up with the Germans, the Soviets convinced themselves that Ciszek and the others were German spies. They were arrested and incarcerated in a typical Russian prison where prisoners were, on a daily basis, near starved, mistreated, abused and threatened with their lives. After hundreds of "interrogations," from which no evidence was ever produced that Ciszek was a spy, he was found guilty of espionage and sentenced to fifteen years at hard labor.

Ciszek went from imprisonment at the dreaded Lubianka prison to the even more dreadful work camps of Norilsk. The prisoners were required to work from dawn until night with very little food and sleep in cells that were overcrowded and unhealthy. Beatings and isolation were the punishment for those who committed the slightest misstep. More severe punishment including execution were prescribed for more serious infractions. The entire time that Ciszek was incarcerated, he maintained his faith in God and religion. He said his Mass even if it was only to himself. He covertly worked with prisoners who had an interest in religion and tried to convert them. Such activities got him in hot water more than once.

Ciszek served his full fifteen years and when he was "freed," he was however released into a culture that was still under the harsh control of the Soviets. He was followed and questioned as were his friends and associates. After years of such oppression and repeated requests to the US Embassy, Ciszek was finally placed on a plane to America. The Embassy representative told him that he was a US citizen again. Russia had been cruel and unfair to him, but he had fallen in love with the heart and soul of the oppressed people who were the true heart and soul of the country. As he flew over for the last time what had so long been his home, he prayed for and blessed Mother Russia.