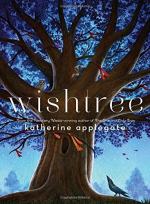 Applegate, Katherine
This Study Guide consists of approximately 50 pages of chapter summaries, quotes, character analysis, themes, and more - everything you need to sharpen your knowledge of Wishtree.

This detailed literature summary also contains Quotes and a Free Quiz on Wishtree by Applegate, Katherine.

The following version of this book was used to create this study guide: Applegate, Katherine. Wishtree. New York, Feiwel and Friends, 2017. HC.

The narrator introduces itself as Red, a 200-year-old oak tree who acts as the neighborhood wishtree: every May first, people write down their wishes and hang them in Red’s branches. Trees and animals must not talk to humans for their own safety, so Red takes its responsibility as a bearer of hopes seriously.

Red hosts the crow Bongo and several families of animals. Though they fight about the crowded conditions, they find ways to get along. Red stands in the yard of a blue and a green house, and the animals share their community with a young girl named Samar who lives there. Samar’s Muslim family is not accepted by the neighborhood so she has no friends, not even Stephen, the boy who lives next door. One night, she ties a wish for a friend to Red’s branches.

A few days later, a lanky young man carves “LEAVE” into Red’s trunk. Red only learns what it means when a passing woman is shocked. Police officers Sandy and Max arrive to speak to Francesca, who lives across the street and owns the houses and Red. Between the carving and Red’s roots and leaves, Francesca thinks it would be easier just to cut Red down. Red and the animals worry about their futures, and the opossum, skunk, and raccoon mothers start to fight about other possible homes in the neighborhood.

Bongo thinks Red should find a way to save itself, but Red decides it will take action for the first time to grant Samar’s wish and help her become friends with Stephen. Red and Bongo execute their first plan: to steal Stephen’s homework and have Samar return it. She simply gives it to a friend of his. In the second plan, a baby opossum named Flashlight pretends to be dead when Samar and Stephen come home from school in the hopes that the children will unite to save him. The children just ask their parents for help. In plan number three, Bongo and the animals work together to untie Samar’s wish. While Samar visits the animals that night, Bongo wakes up Stephen and leaves the wish on his windowsill. He comes outside and talks with Samar, but starts to go inside when a light turns on in his house. Red panics and tells the children to stay.

Red tells its story: in 1848, an Irish orphan named Maeve arrived. She developed healing skills and helped the poor people of the neighborhood as best she could. She was lonely, however, and one day she tied a wish to Red’s branches hoping for “someone to love with all my heart” (136). On the first of May, an Italian woman left her baby in one of Red’s hollows. Maeve adopted the baby despite the judgment of many and named her Amadora, or “gift of love” (146). The wishtree custom strengthened over the years as Ama grew up, bought the blue and green houses, and started to rent them out. Francesca was her great-granddaughter. Stephen and Samar are shocked to hear Red speak, but they leave thinking about the story.

On the last day of April, some people egg Red’s trunk, while others hang wishes. Samar and Stephen walk to school together. Arborists agree to cut Red down the next day, when the animals will leave Red’s hollows for Wishing Day. Stephen and Samar are distressed and try to convince Francesca to keep Red. She refuses, but does give them permission to hunt for Maeve’s journal.

Red and Bongo spend Red’s last night watching the stars and enjoying each other’s company. In the morning, all of the animals but Bongo say goodbye. Stephen, Samar, Sandy, Max, Francesca, and a local news crew settle in to watch Wishing Day. There are far more wishes than usual because Stephen has mobilized the entire school to write “STAY” on index cards and hang them as wishes for Samar’s family. When the arborists arrive, Stephen and Samar convince Francesca to read Maeve’s journal before she makes her final decision. All of the animals, even Francesca’s pet kittens, crowd into Red’s branches to stop the arborists. Francesca ties Maeve’s original wish to a branch and tells the crowd that she now remembers how important the wishtree is to her family and the community. Red will stay, and so should Samar’s family.

Red tells the reader that though some things stay the same, many get better. Samar’s family does stay, and Samar and Stephen become good friends even if their parents never speak. Francesca takes care of Red and Red watches over the animals, who fight but find ways to live together. Red urges the readers to listen closely for the stories all around them.

More summaries and resources for teaching or studying Wishtree.