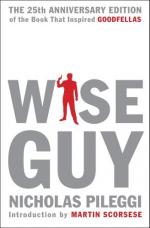 Nicholas Pileggi
This Study Guide consists of approximately 51 pages of chapter summaries, quotes, character analysis, themes, and more - everything you need to sharpen your knowledge of Wiseguy.

This detailed literature summary also contains Topics for Discussion and a Free Quiz on Wiseguy by Nicholas Pileggi.

Nicholas Pileggi's non-fiction book, Wiseguy, is the basis for the hit movie, GoodFellas, directed by Martin Scorsese (1990). Wiseguy is the true story of Henry Hill, a member of the Lucchese organized crime family in New York. Henry's heyday takes place during the 1960s and 1970s during which time he works under prominent mob boss Paul Vario in the Brownsville-East New York section of Brooklyn. Henry is drawn to the mafia lifestyle as a young boy, taking a job at Tuddy Vario's cabstand at the age of eleven. The impressionable boy is introduced to the wealth and power that is granted the men in the Varios' employ. As these men are criminals by nature, they have no qualms about luring young Henry into the life. Henry is industrious, clever, and willing to hustle to run whatever errands the men need. He quickly earns the approval of his elders, who allow him to drive their cars and drink their booze, making Henry feel like an adult. Henry feels accepted and approved of for the first time in his life. He neglects his schooling, and when the truant officer sends a letter to his parents, the Varios respond by threatening Henry's mailman to ensure Henry never receives another such letter.

Henry believes that his wiseguy friends are invulnerable, as indeed they seem to be. In this insular neighborhood, even the legitimate businessmen are willing to cover for their wiseguy neighbors who are admired as entrepreneurs and are unafraid to bend the rules. Wiseguys offer an alternative to scraping out an honest living in difficult economic times; many otherwise honest men and women are willing to accept a bribe now and again to earn a little extra money. Many judges, lawyers, and policemen are also on the wiseguys' payroll. Given these role models, it is no surprise Henry grows up to believe that honesty is for the weak and vulnerable; he perceives law-abiding citizens as fools, as prey.

Henry is ambitious. As he comes of age, he throws himself into wiseguy schemes with gusto. Paul Vario is even more impressed with the adult Henry than he was with the child. Henry is reliable, loyal, and quick to recognize and act on an opportunity. Paulie introduces Henry to Jimmy Burke, who teaches Henry the illegal cigarette business. Jimmy's true passion, however, is hijacking. During the '60s and '70s, the mafia has great influence at John F. Kennedy Airport in New York and hijacking airline cargo becomes a major mafia pastime. Henry and his pals pull of a major heist, stealing nearly half a million dollars from Air France. This heist propels Henry, Jimmy, and their friend Tommy DeSimone to a higher echelon within the mafia.

Paulie offers Henry the opportunity to buy into a gambling ring with the Air France money, and Henry's new wife, Karen encourages him to buy a restaurant to provide for their growing family with a legitimate source of income. Henry does both of these things, and involves himself in dozens of other schemes as well. Henry works hard and plays harder, spending as many nights with girlfriends, prostitutes, and drinking buddies as with his wife and children. Henry is pinched by the police a few times over the years, but invariably buys himself out of trouble with Paulie's support. His children learn to consider his arrests and police searches of their home as routine occurrences. Karen is unfailingly loyal, helping him provide for the family in both his legal and illegal schemes.

Henry sees no reason to change his lifestyle. He enjoys the fruits of other people's labor, taking over and bankrupting in weeks legitimate business that others have worked their entire lives to create. For Henry, there are no consequences. No matter how many businesses and personal fortunes he destroys for his own gain, there is always someone else out there to be lied to, stolen from, or conned. Even when Henry gets ten years in prison, he bribes all manner of guards and officials to get out after four years, and those four years are spent in relative luxury. Karen spends this time in a small, shabby apartment, supporting herself and the children even while helping Henry carry out his schemes so he can continue to live in the style to which he is accustomed.

Shortly after being released, Henry, Jimmy, and Tommy stumble across the opportunity to reprise their Air France score, but this time for ten times the payout. The Lufthansa airlines theft nets them five million dollars in cash plus hundreds of thousands of dollars worth of stolen jewels. The three friends should be on top of the world, but the Lufthansa strike is what finally destroys their lifestyle. Jimmy becomes greedy and paranoid and starts killing off everyone involved in the heist except a few key members of his own crew. Tommy's violent ways come back to haunt him as a rival crime family kills him in revenge for Tommy's having killed a made man. Henry has even bigger problems, as he is arrested in connection with a narcotics conspiracy.

Despite the Lufthansa score and his many other schemes, Henry has continued to sell drugs, which he learned to do in prison when he had no other way of making illegal income. Paulie Vario prohibits drug selling by his operatives because of the risks associated with narcotics busts. Henry, high on drugs most of the time, believes even more strongly in his invulnerability, propelling him to take greater and greater risks. When Henry is arrested, he knows his friends will not help him out this time. Paulie is furious that Henry would jeopardize Paulie's operation with his illegal drug ring. After Paulie turns his back on Henry, refusing to help him in any way, Jimmy is certain Henry will tell the police about Lufthansa in order to secure his freedom. With Paulie's approval, Jimmy begins plotting Henry's death.

When Henry finally accepts that his old friends are after him, he agrees to cooperate with law enforcement. Henry and his family enter the federal witness protection program. Henry's detailed inside knowledge is a dream come true for law enforcement, which has long sought evidence against the elusive Paul Vario. Henry's testimony sends both Paulie and Jimmy to jail, along with a host of other less prominent figures in the criminal underworld. This is Henry's greatest scheme. By turning on his old pals and siding with the government, Henry ensures his immunity to every crime he has ever committed, or may commit in the future.

More summaries and resources for teaching or studying Wiseguy.