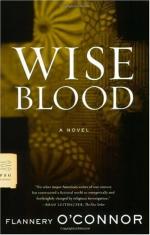 Flannery O'Connor
This Study Guide consists of approximately 78 pages of chapter summaries, quotes, character analysis, themes, and more - everything you need to sharpen your knowledge of Wise Blood.

The story of a man named Hazel Motes, who denies his Christianity and takes desperate measures to prove his disbelief, Flannery O'Connor's Wise Blood made its debut in 1952. Harcourt Brace published the novel right after O'Connor spent a difficult winter suffering from symptoms that doctors later diagnosed as systemic lupus erythematosus. Critics concur that the disease greatly affected O'Connor's life and work, while they question the specific effects it had on her fiction. Many think that O'Connor's use of the grotesque arose from her own experiences with a disease-ravaged body, yet the general consensus is that O'Connor's religious southern upbringing was the most important influence on her writing.

When Wise Blood first appeared, critics gave it little attention and few accolades O'Connor was not well known, and she was writing at the same time as famous writers William Faulkner and Daphne du Maurier. Critics viewed O'Connor as a minor writer, and put her in the same category as other Southern writers of the time, based on her use of violence and bizarre characters. The novel's religious meaning, later to become its strength, escaped recognition. Critic Isaac Rosenfeld, for example, stated in New Republic that Motes "is nothing more than the poor, sick, ugly, raving lunatic that he happens to be."

While most reviewers believed O'Connor's own testimony to the religious meaning in Wise Blood, novelist John Hawkes criticized O'Connor as being somewhat captivated by the Devil. Since that time in 1962, however, critics have defended O'Connor's purpose. They applaud her ability to present her basic theme of Christ's redemption of mankind. In the final analysis, critics now view Wise Blood as an outstanding religious novel.

More summaries and resources for teaching or studying Wise Blood.

Wise Blood from Gale. ©2005-2006 Thomson Gale, a part of the Thomson Corporation. All rights reserved.