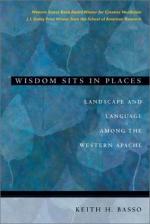 Keith H. Basso
This Study Guide consists of approximately 22 pages of chapter summaries, quotes, character analysis, themes, and more - everything you need to sharpen your knowledge of Wisdom Sits in Places.

Wisdom Sits in Places: Landscape and Language Among the Western Apache Summary & Study Guide includes comprehensive information and analysis to help you understand the book. This study guide contains the following sections:

This detailed literature summary also contains Topics for Discussion and a Free Quiz on Wisdom Sits in Places: Landscape and Language Among the Western Apache by Keith H. Basso.

Wisdom Sits in Places analyzes the relationship between geographical location, cultural symbolism and place-names in the language and linguistic practices of the Western Apache tribe located in Cibecue, Arizona. The author, Keith Basso, is an anthropologist and ethnographer who argues that the field of anthropology does not study the relationship place, language and culture.

Basso first visited Cibecue in 1959 when he was a student. After writing about the Western Apache in a scholarly setting, Basso became bored and so decided to visit the White Mountain Apache Tribe directly in order to make maps the tied Apache place-names to their geographical referents and to records the stories and symbols located with those stories. In the process, Basso secured a grant from the NSF and spent eighteen months over five years (between 1979 and 1983) with the Western Apache, making maps and taking notes.

Wisdom Sits in Places is a short book, composed of four largely independent essays. All focus on the main topic of the book, but they emphasize different points. Each essay also uses a particular member of the Apache Tribe in order to connect a story with the thesis of the essay, but the person differs from chapter to chapter.

Chapter one, "Quoting the Ancestors", emphasizes that places are not merely geographical but social. The historical imagination of a people creates "place" and modifies it over time. Basso illustrates his point by appealing to his interactions with Charles Henry, a sixty-year-old herbalist who created place-words. Most of chapter one has Basso working with Charles and his cousin Morley, traveling around Cibecue, with Charles and Morley giving Basso the information he needs about the places they visit. It also introduces the idea of a "place-name": the proper name for a place that marks out some of its geographical or symbolic features.

Chapter two, "Stalking with Stories", focuses on how place-names are used in Western Apache society. Because place-names associate places with different types of symbols they can be used evocatively to tell stories and make points. It reviews the different types of narratives in Western Apache culture and classifies them. These points are illustrated through interaction with Nick Thompson, an elderly Apache.

Chapter three, "Speaking with Names", shows how place-names are used in action to evoke lessons. The chapter focuses on a conversation among several Apache where Lola Machuse, a sixty-year-old female and others use place-names to explain to a younger woman, Louise, why her brother was foolish. The conversation shows that place-names are often used as a mild form of moral reprimand.

Chapter four, "Wisdom Sits in Places", explores the Western Apache conception of wisdom, a virtue acquires by learning about the land and the history and symbolism associated with it. This practice of learning helps to produce a "smooth, steady and resilient" mind. Wisdom "sits in places" because wisdom is acquired by means of knowing place. In this chapter, Basso makes his points through his interactions with Dudley Patterson, Sam Endfield and Charles Cromwell, three older Apache men with whom he travels.

More summaries and resources for teaching or studying Wisdom Sits in Places: Landscape and Language Among the Western Apache.

Wisdom Sits in Places: Landscape and Language Among the Western Apache from BookRags. (c)2022 BookRags, Inc. All rights reserved.