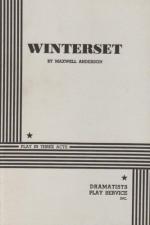 This detailed literature summary also contains Bibliography and a Free Quiz on Winterset by Maxwell Anderson.

Maxwell Anderson's Winterset (1935) is one of the most important verse dramas, or plays written largely in poetry, in the twentieth century. Produced on New York City's Broadway at the height of the Great Depression, Anderson's play is a striking tragedy that deals indirectly with the famous Sacco-Vanzetti case, in which two Italian immigrants with radical political beliefs were executed. With its combination of "low" prose and "high" poetic verse, which enables it to be sharply realistic while simultaneously commenting on universal philosophical themes, Winterset is widely considered Anderson's best verse drama. Its ambitious political and philosophical agenda, as well as its elegant poetry, earned Anderson the Drama Critics' Circle Award of 1936. The style of Winterset has inspired many critics to compare the play to a Shakespearean tragedy.

The plot of Winterset follows Mio Romagna's quest to prove his father's innocence in the years after Bartolomeo Romagna was executed for a robbery and murder he did not commit. This quest is complicated by Mio's newfound love for Miriamne Esdras and the difficult ethical decisions that result from his connection with her family. A challenging political play, with philosophical meditations on faith, truth, justice, love and duty, Winterset not only alludes to Shakespearean and Judaic philosophy; it develops a profound moral system of its own. Available in individual editions such as that published by Anderson House in 1935, Winterset is a landmark in American drama universalized by its superbly crafted poetry and its profound philosophical assertions.