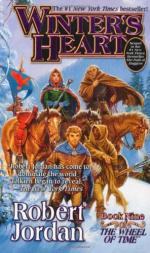 Plot Summary
+Chapters Summary and Analysis
Chapters 1-2 Leaving the Prophet; Taken
Chapters 3-4 Customs; Offers
Chapters 5-6 Flags; The Scent of Madness
Chapters 7-10 The Streets of Caemlyn; Sea Folk and Kin; A Cup of Tea; A Plan Succeeds
Chapters 11-12 Ideas of Improvement; A Lily in Winter
Chapters 13-15 Wonderful News; What a Veil Hides; In Need of a Bellfounder
Chapters 16-17 An Unexpected Encounter; Pink Ribbons
Chapters 18-19 An Offer; Three Women
Chapters 20-21 Questions of Treason; A Matter of Property
Chapters 22-23 Out of Thin Air; To Lose the Sun
Chapters 24-25 Among the Counsels; Bonds
Chapters 26-27 Expectation; To Surprise Queens and Kings
Chapters 28-31 News in a Cloth Sack; Another Plan; Cold, Fat Raindrops; What the Aelfinn Said
Chapters 32-35 A Portion of Wisdom; Blue Carp Street; The Hummingbird's Secret; With the Choedan Kal
Free Quiz
Characters
Objects/Places
Themes
Style
Quotes
Topics for Discussion
Order our Winter's Heart Study Guide

Robert Jordan
This Study Guide consists of approximately 38 pages of chapter summaries, quotes, character analysis, themes, and more - everything you need to sharpen your knowledge of Winter's Heart.

This detailed literature summary also contains Topics for Discussion and a Free Quiz on Winter's Heart by Robert Jordan.

The fantasy world in the Wheel of Time series of novels is out of whack. This ninth novel in the series opens with conflicts continued from the previous book and two major factions preparing to fight it out. One faction uses the Power to weave patterns that can cause great destruction or perform miraculous healing. The other faction tries to suppress the Power and its masters known as Aes Sedai. Central to this all is Rand al'Thor, the Dragon Reborn. Rand has the ability to channel the Power and also potentially to bring the world back into balance. The age is called the Time of Illusions and is unstable with so many willing to go at each other's throats.

Armies are on the march while one of Rand's friends, Mat Cauthon, finds himself trapped in the port city of Ebou Dar and hunted by a humanoid monster called a gholam. The creature nearly takes Mat's life in a deserted alleyway, and the only thing that saves him is a special amulet that he always wears around his neck. Not only must Mat escape the creature, he needs to break off a relationship with the Queen, Tylin Quintara Mitsobar. As Mat schemes his escape, he finds himself responsible for two Aes Sedai who also need to escape, and eventually a whole band of people. Whether his escape comes off successfully is left up to the reader's interpretation, for that part of the story is not told.

Rand's story does come to completion. He takes the Choedan Kal, a set of special statues, one male and the other female, to the city of Caemlyn in the country of Andor and gives them to an Aes Sedai named Nynaeve al'Meara for safe keeping while he goes to Far Madding in the country of Illian. Nynaeve will have none of this and comes along. Before he leaves Caemlyn, Mat bonds with three women, even though he had been bonded to another before this story began.

In Far Madding, Rand manages to channel the Power, which registers on a device in the city that suppresses the power and points to the location of anyone trying to use it. His troubles compound when five assassins come after him, one of which he kills. But while trying to kill the others before they kill him, Rand falls into a trap set by the city Counsel. He runs away from the awaiting city guards and falls off a high roof. Captured, another must negotiate his release. This woman is the Aes Sedai named Cadsuane Melaidhrin, who can also channel the Power in the city. She does so and convinces the Counsel to release Rand to her. This allows Rand and Nynaeve to use the Choedan Kal and thereby set the world straight again in a dramatic climax that ends this ninth novel in the series. The whole point was to knock the Wheel of Time out of the Time of Illusion and into the next major cycle. Three more novels follow with two in the development stages, due for release in late 2010 and 2011.