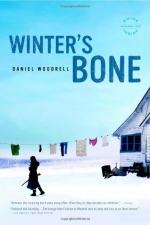 Daniel Woodrell
This Study Guide consists of approximately 39 pages of chapter summaries, quotes, character analysis, themes, and more - everything you need to sharpen your knowledge of Winter's Bone.

The following version of this book was used to create the guide: Woodrell, Daniel. Winter's Bone. New York: Back Bay Books, 2006.

Daniel Woodrell's Winter's Bone is set in the Ozark Mountains, and follows the story of 16-year-old Ree Dolly's search for her father, and for her own identity. Told in the third person, and written in the past tense, the novel is divided into unnumbered and untitled chapters.

When Ree Dolly discovers that her lawless father, Jessup Dolly, has skipped bail, she becomes determined to locate him in order to save her family from financial ruin. Because her mother is mentally incapacitated, and her father is perpetually absent, the majority of the home and family responsibilities are left to Ree. So when one day, Deputy Baskins arrives with word that, if Jessup should fail to appear in court the following week, the family will lose their home and property, Ree becomes even more overwhelmed. She realizes her chances of escaping her entrapping familial and environmental circumstances are rapidly decreasing.

Ree starts her search for Jessup by invoking the help of her father's brother, Uncle Teardrop, and his first cousin, Blond Milton. Both men, however, discourage Ree's efforts. Because all of the Dolly men cook meth, they are involved with dangerous men, with whom they do not want Ree to interact. Despite their warnings, Ree ventures off to Hawkfall and begins inquiring after Jessup. While there, she is told she must visit Thump Milton if she wants to know the truth. Mrs. Thump, however, assures Ree that her husband will never see her, and tells her never to return to the property.

Back home, Ree is delighted when her childhood friend, Gail, arrives and agrees to help her find Jessup. While staying with Ree, Gail tells her friend that her husband is cheating on her. She and her infant son, Ned, begin staying with Ree and her family as a result. Ree welcomes her company, feeling a deep longing for intimacy with her friend. Shortly thereafter, Blond Milton barges into the home, furious that Ree has been asking around about Jessup. He drags Ree from the house, and drives her to a burned-out house, where he assures Ree her father died. Ree refuses to believe him. She knows her father's reputation as the best and most careful cook, and does not think he would have blown up a lab.

Convinced she might still bring her father back, Ree takes Gail on her next ventures. They travel around the valley, visiting anyone who might have connections to or word of Jessup. Shortly after their return, Uncle Teardrop tells them the cops found Jessup's truck, burned on the roadside. Ree believes this proves her father is dead. So, when Baskins later appears to report Jessup's failure to appear in court, Ree assures him her father was killed. He says the only way for her to save her home is to prove he is dead.

Though she was forbidden not to, Ree returns to the Thumps, hoping they will confirm their involvement in Jessup's murder. Not long after arriving, the Thump women violently attack her, nearly killing her with their kicks and blows. Uncle Teardrop shows up and rescues her. He and Gail stay by her bedside and care for her as she recovers. Ree goes in and out of consciousness, numbed and disoriented by the painkillers she is taking. Eventually realizing she cannot slip into the same numbed existence as her mother, she eases off the pills and attempts returning to her life.

Not long after, the Thump women appear in the middle of the night, promising to take Ree to Jessup's grave. They put a sack over her head and drive her to a pond in an unknown location. They tell her if she wants to prove Jessup is dead, she will have to retrieve his body, chop off his hands, and deliver them to Baskins. Although disturbed by this, Ree follows their instructions. Once Baskins has the hands, she and her family are able to keep their home. The bail bondsman visits shortly after, and gives Ree a sum of money that would have belonged to her father. She and her brothers decide they will buy a car with the money.

More summaries and resources for teaching or studying Winter's Bone.