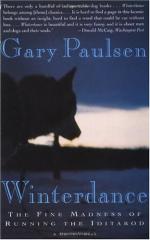 Gary Paulsen
This Study Guide consists of approximately 33 pages of chapter summaries, quotes, character analysis, themes, and more - everything you need to sharpen your knowledge of Winterdance.

This detailed literature summary also contains Topics for Discussion and a Free Quiz on Winterdance by Gary Paulsen.

Gary Paulsen moves his family to Minnesota, drains their bank account, and begins running sled dogs. At first the dogs are a means of transportation and income, but Gary's relationship with his team evolves until he decides to run them for pleasure. It is not long before Gary realizes that he is destined to run the Iditarod Sled Dog Race.

Once Gary makes the decision to run the race he embarks on a comical lesson about himself and life in general. Gary has never run sled dogs except on his short runs to check his trap lines. He is also used to a team of four dogs but in order to run the Iditarod he will have to work his way up to a team of at least fifteen. The process of procuring viable sled dogs is an adventure in itself. Gary is given dogs by friends, people wanting to be rid of their animals, and older sled dogs. He purchases three Canadian sled dogs, one of which has a foul temper. Gary soon realizes that he knows nothing about dogs. As Gary relates the wrecks, long walks home after losing the team, and other numerous mishaps during training, the reader begins to doubt his ability to undertake such a grueling adventure as the Iditarod.

Gary finally arrives in Alaska and spends two months before the start of the race re-training himself and the team. He soaks up information from veteran mushers and tries to prepare himself for the unknown. Before long it is time for Gary and the team to cross the starting line. True to form the team is a mess and Gary begins the race off course and dragging behind the team. Throughout the race Gary encounters stunning views, tragic disasters, and the opportunity to re-evaluate his own life. Gary learns that simplicity is often better than being swept up in money and things. Gary studies the dogs to learn from them and become one of them. His life is absorbed by the dogs and the freedom they bring him. The Iditarod is a race through the wilds of Alaska and the trail takes Gary on the journey of a lifetime.

More summaries and resources for teaching or studying Winterdance.