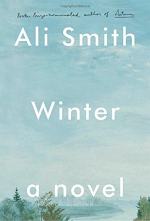 Related Topics
How to Be Both
Autumn: A Novel
Hotel World
Spring: A Novel

Ali Smith
This Study Guide consists of approximately 68 pages of chapter summaries, quotes, character analysis, themes, and more - everything you need to sharpen your knowledge of Winter.

Importance: This initial litany of “dead” (3) objects, concepts, and entities sets the novel’s simultaneously apocalyptic and wry tone. At first, each of these dead things provokes anxiety in the reader; however, as their numbers mount, the list grows comical, mocking the nihilism of those who would dismiss these grandiose concepts. The litany also has a muffling effect, each layer contributing to the snowed-in, wintery atmosphere of the novel, in which the future spring lays in constant doubt.

Forget ghosts, put them out of your mind because this isn’t a ghost story, though it’s the dead of winter when it happens, a bright...
-- Narrator (Book 1, Part 1)

More summaries and resources for teaching or studying Winter.