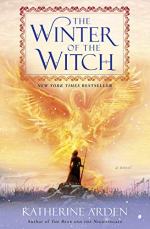 Katherine Arden
This Study Guide consists of approximately 60 pages of chapter summaries, quotes, character analysis, themes, and more - everything you need to sharpen your knowledge of Winter of the Witch.

Winter of the Witch Summary & Study Guide includes comprehensive information and analysis to help you understand the book. This study guide contains the following sections:

This detailed literature summary also contains Quotes and a Free Quiz on Winter of the Witch by Katherine Arden.

The following version of this book was used to create this Study Guide: Arden, Katherine. The Winter of the Witch. Del Rey, 2019. Hardcover.

In the wake of a devastating fire, Grand Prince Dmitrii and a priest named Sasha try to decide how to help the people recover. Meanwhile, a priest named Konstantin commands a mob to capture Vasya, Dmitrii’s cousin, claiming that she is a witch who set the fire. The mob descends on Vasya’s home and Konstantin kills her beloved, magical horse Solvely as the mob beats her nearly to death. He tells Vasya to beg for her life, but she refuses. Instead, she asks the death-god Morozko to let her go with Solovey. However, he tells her she must live as Konstantin takes her to a funeral pyre. She is put into a cage as the pyre is lit, but she uses her magic to escape. Outside, she is horrified to see the Bear (Medved) who killed her father before he was locked away. The Bear says he came to save her after Morozko traded his own freedom to release him. However, Vasya’s servant Varvara sends Vasya into a realm called Midnight where the Bear expects Vasya to die.

After learning of Vasya’s execution at the hands of Konstantin, Sasha tries to convinces Dmitrii to arrest the priest. However, weary of a riot, Dmitrii asks to speak to Konstantin instead. Once there, the priest reveals that Vasya is the one who started the fire and Sasha is unable to say she saved the city without revealing that she is a witch. Prince Vladimir arrives and says that the Tartars are raising an army and demanding payment to stop them from attacking Moscow. Dmitrii sends Konstantin away and tells Sasha that he needs to regain his trust. Sasha returns to Olga and tells her Dmitrii has sent him to find Father Sergei, much to Olga’s anger. Meanwhile, Lady Midnight tells the Bear that Vasya has survived in Midnight and both Lady Midnight and the chyerti are trying to decide which side to fight for.

Vasya wakes up in darkness and Lady Midnight tells her she will have to find safety at the lake on her own. Vasya walks as far as she can, meeting many chyerti on the way. This includes the golden mare she calls the firebird that she devastated Moscow after Vasya freed her. She follows the horse to an abandoned home by a lake where Vasya wakes up the domovaya. After the domovaya cleans Vasya’s wounds and lets her rest, she sends her into the forest to gather food. Once there, Vasya meets a mushroom named Ded Grib and a bannik in the lake. The bannik tells Vasya that the chyerti are watching her. When Vasya is stuck out in the forest, she finds the golden mare and the Bear who asks Vasya to join him. He says that she does not owe Moscow anything, but Vasya rejects his offer. He goes to attack her, but an old woman who Vasya realizes is her great-grandmother Baba Yaga, sends him away. After tending to Pozhar’s wounds, Baba Yaga tells Vasya to stay and learn her power, but sends her away when Vasya says she wants to find Morozko and save both worlds.

After Lady Midnight visits Vasya, she asks Pozhar to lead her to Morozko’s mare as the two horses have a strong connection with each other. She agrees as long as Vasya does not ride her. They, along with Ded Grib, come across a camp of men that the river-king is attempting to drown. She saves the leader before learning from the river-king himself that the Bear told him to wash away the silver. As she leaves, she realizes she just saved Vladimir and the silver was meant to placate Mamai.

She finds her way back to Ded Grib and Pozhar and they continue on. Pozhar calls Lady Midnight’s horse, Voron, to leave them much to Lady Midnight’s annoyance. However, she is impressed to learn that Vasya is not looking for Morozko because of love, but because she truly believes he is the only one who can help her. Lady Midnight leads Vasya to Morozko’s prison - a town trapped in an endless night. Vasya goes in alone and realizes that Morozko is trapped in a younger memory of himself and has no recollection of her. She intervenes when he tries to take a woman and they get into a fight where he cuts her wrist. However, he remembers her enough to carry her to a bathhouse and heal her. Once there, the two kiss and his memories of her return. He says he did not want her to die and the two share an intimate night. In the morning, Morozko agrees reluctantly to accompany Vasya to the summer Moscow. They walk out of the town together and decide they are going to find the golden bridle that bound Pozhar to the sorcerer.

As Vasya and Morozko head back to Moscow, the bear uses Konstantin to spread the plague and raise a bigger undead army to take Moscow. Vasya and Morozko come across Father Sergei and Sasha who is hesitant to accept Morozko’s help. Sergei, however, believes they must work with what God has given them and they all head for Moscow. On the way, Lady Midday tries to kill Sergei, but Morozko saves him by cooling everyone down with his power. They hurry into Moscow as the Bear knows Morozko is there, but Sasha is imprisoned by Dmitrii while Vasya is forced to run home after the Bear fights Morozko.

She works with Olga to sneak into the Grand Palace to find the golden bridle. Once inside, however, Vasya panics when Konstantin sees her and runs to the treasure room. As guards arrive, she accidentally summons a thunderstorm and Morozko himself, an act that shocks them both. After he pulls her back from her madness, she takes the ropes from the bridle and rushes back to find the bear. However, Konstantin kidnaps Olga and demands that Vasya turn herself in. An army of the dead arrive as Dmitrii and Olga. Sergei arrives and dispels the undead by faith alone. This shatters the last of Konstantin’s mental state as he believed God did not exist and he kills himself to weaken the Bear so Vasya can bind him. Morozko takes him away as Dmitrii asks for their help on the impending invasion of the Tartars.

During the meeting, Vasya promises that she and Sasha will find Vladimir and return him to Dmitrii before the battle. Morozko agrees to meet Olga who hesitantly gives them her blessing. Morozko heads back to his realm as Vasya says she loves him, but refuses to go with Moscow at risk. She and Sasha travel into Midnight, but Lady Midnight is disappointed in Vasya for reasons unknown and betrays her by sending them into the camp of the Tartars. As Sasha is tortured for information, Vasya convinces a prince of Dmitrii’s named Oleg that she can free her family and, if she does, he must fight for Dmitrii. Eventually, she uses her magic to escape her bonds, finds Sasha, and tries to leave together. However, they are chased down by a Tartar Chelubey that Sasha tackles so Vasya can get away on Pozhar.

Back in Midnight, Vasya finds the Bear and convinces him to make an oath with her. In exchange for his freedom, he is to serve her and keep from causing chaos in the human world on his own. He agrees as Lady Midnight arrives. She tells Vasya she needed to understand that she cannot choose what is good and evil. Vasya demands Lady Midnight make an oath herself, and the chyerti does so. With Pozhar and Medved, Vasya charges back into the same Midnight she left Sasha, saving him with Voron before rescuing Vladimir. She sends all of them through Midnight and promises Oleg that she can deliver him to Dmitrii for a meeting and have him back at camp at the exact same time. He agrees, impressed.

Everyone meets back at Moscow and decide they will meet the Tartars at Kulikovo. Oleg says he will betray the Tartars when the time is right and Vasya takes him back. Sasha, Sergei, and Dmitrii meet with Vasya who tells them that they must accept the chyreti’s existence and freedom if they want to win the war. All three of them agree before both Medved and Lady Midnight. Vasya returns to Midnight, finds Ded Grib, and uses him and the Bear to spread chaos within the Tartar’s army. However, she feels guilty when they raid a nearby town and kill a pregnant woman in their desperation.

As both armies prepare to fight, Sasha asks Dmitrii to act as the armies champion and challenge someone from the Tartar’s to single combat, as he believes winning will boost the army’s morale. Dmitrii agrees and Sasha leaves to speak with Vasya about the world they are trying to save. Winter arrives, Morozko confronts Vasya for releasing the Bear, but she tells him that they must work together to save both worlds. As Sasha wins the battle, Dmitrii sends the army forward. However, Vasya realizes that a sword impaled Sasha in the chaos. She rushes to him, but knows he is going to die. She tells Medved to take vengeance for her and he gives her the power to raise the dead before charging into battle. Vasya gets on Pozhar behind her brother and rushes to find Morozko. However, Sasha refuses to be revived and allows Morozko to take him to the afterlife. Afterwards, Morozko, Medved, and Vasya work together to decimate the Tartar army. Oleg betrays the Tartar’s in the chaos as Vladimir and his army arrive, destroying the invading force over an unknown amount of time.

When the battle is over, Vasya takes Dmitrii to Sasha’s body where he agrees to send him back to Larva to be buried. Dmitrii promises that Sasha will not be forgotten, but Vasya feels empty for losing him and leaves into the darkness. Morozko and Medved follow her and she realizes that both of them have united under her. Morozko says Medved owes him a life, and Medved brings back Solovey before leaving with a joking promise that he might return if Vasya calls for him again. Morozko and Vasya find Ded Grib and Lady Midnight at the lake and both says they will see her again before vanishing. Vasya and Morozko walk into Midnight, uncertain of where they are going, but content on riding into it together.

More summaries and resources for teaching or studying Winter of the Witch.

Winter of the Witch from BookRags. (c)2022 BookRags, Inc. All rights reserved.