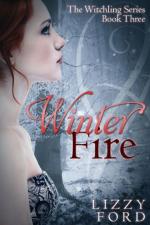 Lizzy Ford
This Study Guide consists of approximately 20 pages of chapter summaries, quotes, character analysis, themes, and more - everything you need to sharpen your knowledge of Winter Fire (Witchling Series).

Winter Fire is the third novel in the Witchling Series by Lizzy Ford. In this novel, Beck finds his counterbalance in fiery redhead Morgan, but he is unaware that she has a dark secret that could destroy all Beck has been working for since becoming the Master of Light. At the same time, Beck is battling with his ex-girlfriend. He is determined to get custody of their daughter now that he knows Dawn's identity. Winter Fire is a fitting conclusion to a unique trilogy.

Beck Turner has had a tough few weeks. First, he had to fight to prove his innocence in the death of Tonya, a young girl he dated briefly before she was found stabbed to death in an abandoned ski lodge. Second, he is embroiled in a bitter custody fight for his unborn daughter with ex-girlfriend Dawn. Third, Beck has only recently taken on the role as Master of Light, and he is still struggling to figure out all the rules and duties of his new job. Very little time has been left for Beck to date. That's unfortunate because he cannot get Morgan MacLeod off his mind.

Even as Beck tries to forget Morgan, however, Amber reminds him that he promised to be her mentor. It seems Morgan is having trouble in class, often not going or not doing the homework. Beck pulls her aside to talk about this situation, but Morgan is belligerent and unwilling to promise anything. Beck then learns that Morgan has a dislike of Christmas that appears to stem from some tragedy. It makes Beck more determined than ever to help her.

At the same time, Morgan feels drawn to Beck but dislikes his reputation as a womanizer. She vows to stay away from him until the yeti, Sam, tells her that Beck needs her help. Morgan promises to keep an eye out for Beck. For this reason, Morgan reluctantly accepts a date with Beck to go see Christmas lights. The date begins well, but it begins to go downhill when first Decker and Summer show up and then Dawn arrives.

Dawn and Beck argue as Dawn tries once again to convince Beck they would all be better off if he would just agree to marry her. Morgan senses Beck’s pain in dealing with Dawn and charges to his side. Dawn is not impressed, and Beck worries that Dawn will know that he and Morgan are dating. For this reason, Beck tells Dawn that Morgan is not his type. This upsets Morgan even though she and Beck share a kiss when he takes her home.