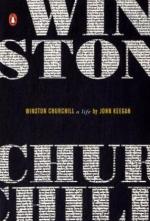 This detailed literature summary also contains Topics for Discussion and a Free Quiz on Winston Churchill: A Penguin Life by John Keegan.

Sir Winston Leonard Spencer-Churchill (1874-1965) is one of the most famous leaders of the twentieth century, known primarily for leading the United Kingdom through World War II. He is also known for his famous speeches and prose, including his "We Shall Fight Them On The Beaches", "This Was Their Finest Hour" and "The Iron Curtain" speeches. Churchill is the Prime Minister of Britain from 1940 to 1945 and again from 1951 to 1955.

Churchill is also an important M.P. (Member of Parliament) in Britain, advancing important social reforms that lay the groundwork for Britain's welfare state, defending free trade and promoting balanced budgets at various periods in his political career. Starting as a member of the Conservative party he changes to the Liberal Party and then changes back again.

Churchill is a well-known writer, journalist and speech-giver prior to becoming Prime Minister. He writes several novels that are based on his experiences across the world as a soldier. He also writes several histories, such as his The Second World War (for which he wins the Nobel Prize in Literature in 1953), his History of English-Speaking Peoples and My Early Life, an autobiographical account of his youth.

As mentioned, Churchill is a well-known soldier who fights in India, the Sudan and the Second Boer War that not only gave him knowledge of the workings of the military but give him an unflappable sense of physical courage. He also briefly commands the 6th Battalion of the Royal Scots Fusiliers and serves as First Lord of the Admiralty on several occasions.

When Churchill dies, the Queen gives him a state funeral that is one of the largest funerals for a democratic leader in world history.

John Keegan's brief biography of Winston Churchill discusses all of these events and more. While many biographies of Churchill have been written, this one is short, accessible and could easily be read in a day. Keegan motivates the biography as an attempt to account, in short order, for a man that he grows up regarding as a reactionary but discovers is an extraordinary hero with the power to inspire a nation to survive in the face of great evil.

The book contains ten chapters that proceed methodically through Churchill's life. The first chapter explains Keegan's background with Churchill's memory and speeches and his role in history. The next nine chapters all cover a discreet period of Churchill's life, such as Chapter Two, which tells the story of Churchill's family and his youth, Chapter Four, which explains Churchill's period as a young M.P. from 1900-1910 and Chapter Nine, which discusses Churchill's role as a member of "The Big Three" leaders of the Allied Powers from 1941 to 1945.