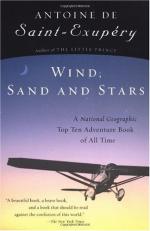 Antoine de Saint-Exupéry
This Study Guide consists of approximately 41 pages of chapter summaries, quotes, character analysis, themes, and more - everything you need to sharpen your knowledge of Wind, Sand and Stars.

Saint-Exupery describes his experiences as an aviator in places ranging from Europe to Africa to South America.

He traces the topography of Spain field by-field and farm-by-farm with his friend Henri Guillaumet before embarking on his first real flight for the Latecoere Company; he crashes in the Sahara Desert with his engineer Prevot during an attempted long-distance flight from France to Saigon; he visits the battlefields of the Spanish Civil War as a correspondent and observes the strength and the sadness of the soldiers there. Saint-Exupery is a sensitive and observant traveler, and Wind, Sand and Stars derives its power from his insightful descriptions of the exotic sites to which his restless wings take him.

More summaries and resources for teaching or studying Wind, Sand and Stars.

Wind, Sand and Stars from Gale. ©2005-2006 Thomson Gale, a part of the Thomson Corporation. All rights reserved.