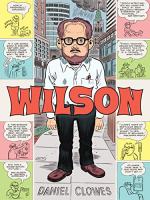 Daniel Clowes
This Study Guide consists of approximately 29 pages of chapter summaries, quotes, character analysis, themes, and more - everything you need to sharpen your knowledge of Wilson.

This detailed literature summary also contains Quotes and a Free Quiz on Wilson by Daniel Clowes.

The following version of the novel was used to create this study guide: Clowes, Daniel. Wilson. Drawn and Quarterly, April 27, 2010.

Wilson, the main character in the graphic novel Wilson by Daniel Clowes, is a man who repeatedly undermines his own best efforts to love his life. His dislike of others seeps out, even when he tries to pretend like he likes people. After the death of his father, Wilson attempts to reconcile with his ex-wife and learns he has a daughter. His attempt to get to know his daughter ends in Wilson getting sent to jail on a kidnapping charge. Through the course of the novel, Wilson attempts to find meaning in life.

Wilson’s story begins when he learns his father has a fatal illness. Wilson leaves his dog, Pepper, with a dog sitter and travels to his old town to see his father in the hospital. During his visit, Wilson's father dies. Walking through the neighborhood where he grew up, Wilson is bombarded with memories of his past. He becomes lonely for his ex-wife, Pipi.

Wilson learns from his ex sister-in-law that his ex-wife went through some bad times after their divorce. She stooped to working as a prostitute at one point. After learning this, Wilson goes to the part of town where prostitutes work hoping to find someone who knows Pipi. He does not find her there. However, when he goes to eat at the Huddle House, where her sister says that she sometimes visits, Pipi is his waitress. Pipi recognizes Wilson before he recognizes her.

The two attempt to reconcile. Wilson even hires a private detective to find the daughter whom Pipi gave up for adoption. Discovering that Claire, the daughter of Wilson and Pipi, is unhappy with her adoptive family, Wilson decides that he and Pipi should take the girl out for a road trip. Even though Wilson imagines them living together as a happy family, Pipi admits to Wilson that she feels nothing for her daughter and that she is uncomfortable with the idea of having taken Claire from her family without having asked their permission.

Wilson next appears in jail. He has been found guilty of kidnapping Claire. Both Pipi and Claire testify against him. After four years in jail, Wilson finally gets in touch with his ex sister-in-law who tells him that Pipi died from an overdose of drugs. Wilson returns to his home in California to discover that his dog, whom he left five years prior when he went to visit his father, was sick and had to be put to sleep. Wilson grieves for the dog and pays her more respect than he did his father.

Wilson next initiates a relationship with Shelley, the woman who dog sat Pepper. He complains on the phone to his friend that their relationship is more like housemates than lovers. To his surprise, Claire contacts him one day to tell him she is married. She says that she has been through a good deal of therapy. She believes that she has come to terms with her past. While they are together, Claire shows Wilson pictures of his grandson. Wilson begs Claire to let him come live in Alaska with them, but Claire says she does not think that is a good idea. Wilson tries to talk to his grandson via the computer, but his grandson ignores him.

The story ends with Wilson sitting in a chair, watching the rain. He comments to himself that he finally gets the meaning of life. He does not share that meaning with the reader.

More summaries and resources for teaching or studying Wilson.