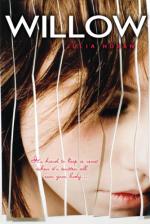 Julia Hoban
This Study Guide consists of approximately 38 pages of chapter summaries, quotes, character analysis, themes, and more - everything you need to sharpen your knowledge of Willow.

This detailed literature summary also contains Topics for Discussion and a Free Quiz on Willow by Julia Hoban.

Willow is the story of a high school teenager struggling to deal with the sudden death of her parents through the use of self-mutilation or physical pain she can control. Willow's life is isolated and reckless until she meets a sensitive, popular boy named Guy who shows Willow how to feel emotion, and teaches her how to love again.

At the opening of the novel, Willow Randall has just been transferred to a new high school after the sudden death of her parents. One rainy evening, Willow's parents had too much to drink at a party and asked Willow to drive them home even though she only had a learner's permit. Willow wrapped the car around a tree, instantly killing her parents. Now Willow is forced to live with the grief and guilt of losing her parents. From the opening of the novel, it is clear that Willow has not handled those emotions well. She sits in class obsessing over the scratch on a schoolmate's arm, wondering if the wound was self-inflicted, like all of Willow's wounds. As the day progresses, Willow mutilates herself in the bathroom and spends all of her free time obsessing over when she will be able to cut again. Willow has no friends at her new school and is terrified that people will find out that she's the girl who killed her parents.

Since her parent's death, Willow has been sent to live with her older brother, David, a university professor, and his new wife and child. Willow feels guilty not only for accidentally killing David's parents, but for messing up his picture perfect life. Although Willow had David had been close growing up, they find it impossible to talk about their emotions following their parents' death, leaving Willow further isolated. Cathy, David's wife, has gone out of her way to make Willow feel welcome in their home, but Willow resists all forms of affection, perhaps because she feels she is unworthy of it. Also fueling Willow's self-harm is the jealousy she feels toward her infant niece, Isabelle. Whenever Willow sees David kiss or cuddle his daughter, Willow is overwhelmed with emotion, knowing that she will never be anyone's daughter again, and that no one will love her as unconditionally as a parent would. All this changes, however, when Willow meets Guy, a sensitive and handsome schoolmate who stops into Willow's job at the university library for help with his research. Guy is interested in all the same books as Willow and the two bond over their love of Tristes Tropiques, the book that had once been Willow's father's favorite. Although Willow is drawn to Guy, she fears getting too close to him because she doesn't want him to know her deep secret: that she's covered in scars. Guy does find out, however and is horrified. He threatens to tell David the truth about Willow's body, but in the end, decides that he will make it his personal project to save Willow's life.

Guy and Willow begin spending almost all of their spare time together and Guy monitor's Willow's behaviors. He tries to understand what fuels Willow's desperate need to cut into her skin and he realizes alongside the reader that Willow is harboring so much emotional pain and the only way she can release it is through physical pain, a pain that she can control. The only way for Willow to stop cutting herself is for her to learn how to process her emotional pain with a healthy outlet: through talking. As the novel progresses, Willow slowly learns how to trust again. She makes a few friends and even loses her virginity to Guy, a symbol of how far she's come in repairing her broken heart. At the end of the novel, however, the turning point is when Willow is finally able to speak with David about their great loss, thus repairing their much damaged relationship. In the final scene of the novel, Willow tosses her razorblades into the river as a symbol of her new life without self-mutilation.

More summaries and resources for teaching or studying Willow.