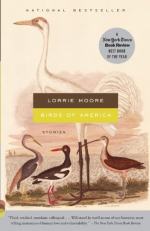 Lorrie Moore
This Study Guide consists of approximately 22 pages of chapter summaries, quotes, character analysis, themes, and more - everything you need to sharpen your knowledge of Willing.

This detailed literature summary also contains Quotes and a Free Quiz on Willing by Lorrie Moore.

The following version of this story was used to create this study guide: Moore, Lorrie. “Willing.” Birds of America. New York: Vintage Books, 2010.

“Willing” follows a woman named Sidra who has made a career as “a minor movie star” (6) in Hollywood. As she nears the age of 40, she becomes disillusioned with her work and life in Hollywood. She decides to move back to her hometown of Chicago, where she takes up residence in a room in a cheap hotel. She aspires to settle down, have a family, and lead a quiet life of anonymity. At first, her life there is generally boring and isolated, although she sometimes speaks on the phone with her friend Tommy, a Hollywood screenwriter. Sidra visits her parents each week, but her father disapproves of Sidra’s film career and does not have a good rapport with her.

Sidra occasionally spends time in bars in Chicago, although men seem generally intimidated by her. One day, she happens to meet an auto mechanic named Walter, nicknamed Walt. Walt has never heard of Sidra before, nor has he seen any of her films. Sidra is immediately attracted to him and his seemingly down-to-earth personality. She and Walt go to Walt’s home and have sex. Sidra and Walt continue to date each other, although Sidra finds herself fixated on Hollywood, and Walt feels that Sidra does not truly respect him. Sidra occasionally spends time with an old high school friend named Charlotte. Charlotte warns that she has heard rumors that Walt is sexually unfaithful to the women he dates.

As Walt and Sidra continue to date, their incompatibilities become more evident. They share no interests, and their relationship begins to break down. Sidra becomes angry at Walt, and they have an argument. Eventually, Sidra calls Walt and says that she wants to see him again. They have sex, and Sidra says that she wants to have dinner with Walt the following night. However, Walt says that he made plans to have dinner with a woman he met at work. Walt claims that it is not a date, but he stays out all night, so Sidra reaches the conclusion that it was a date and that Walt had sex with the woman. Walt eventually admits to the infidelity and Sidra realizes that a relationship with Walt will not be possible. Sidra fears that she will never have a quiet, fulfilling life of domesticity.

More summaries and resources for teaching or studying Willing.