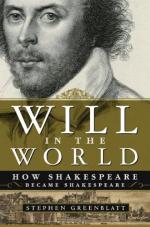 Introduction & Overview of Will in the World

Will in the World Summary & Study Guide Description

Will in the World Summary & Study Guide includes comprehensive information and analysis to help you understand the book. This study guide contains the following sections:

This detailed literature summary also contains Bibliography and a Free Quiz on Will in the World by Stephen Greenblatt.

Stephen Greenblatt's Will in the World: How Shakespeare Became Shakespeare (2004) is a biography of William Shakespeare. In it, Greenblatt proposes to answer the question of how a man with only a secondary school education, the son of a small town glove maker, became the most renowned playwright of all time. As with other persons in Elizabethan England—England during the reign of Queen Elizabeth I, 1558–1603—there are records of Shakespeare's life. Some of these correspond to the usual signposts: birth, marriage, and death. Scattered records of other moments, especially of transactions in which he was involved, also exist. In all, however, they form only a sketchy trail with considerable gaps. Greenblatt builds entire scenarios around the limited evidence. He connects what is known about key moments in Shakespeare's life to what historians have learned about what was going on at those moments in England. He then relates both the personal history and the larger social history to Shakespeare's plays and poetry.

Will in the World is only one of several books by major scholars of Shakespeare to come out at around the same time. These books, the fruits of a generation of scholarship, sum up insights and appreciation that have developed over decades of teaching and research. Some, like Shakespeare (2002), by David Bevington, and The Age of Shakespeare (2004), by Frank Kermode, are similar to Will in the World in that they draw connections between Shakespeare's art and his life and times. But no scholar has been more influential in promoting this approach to the study of literature in general and Shakespeare in particular than Greenblatt. His Will in the World has attracted more readers than any other contemporary book on Shakespeare. It is therefore having a major impact on our understanding of Shakespeare today.