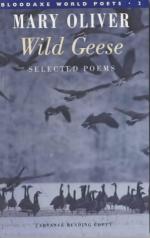 Mary Oliver
This Study Guide consists of approximately 28 pages of chapter summaries, quotes, character analysis, themes, and more - everything you need to sharpen your knowledge of Wild Geese.

The first line of "Wild Geese" is one that many readers recall long after putting the poem aside. The use of the second person "you" may seem generic at first, but later in the poem, the reader understands that he or she is the one directly addressed. This line is ambiguous in meaning because one is not sure if the speaker is saying that "You do not have to be good" in the moral sense of good versus evil, or whether one does not have to be good at doing something. The first meaning is probably the one most people believe is intended, and the next two lines of the poem appear to verify it.

The religious connotation in lines 2 and 3 supports the notion that you do not have to be a "good" person if you do not want to be. The "walk on your...

More summaries and resources for teaching or studying Wild Geese.

Wild Geese from Gale. ©2005-2006 Thomson Gale, a part of the Thomson Corporation. All rights reserved.