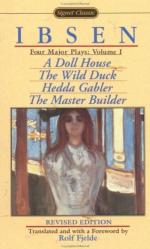 Ekdal (also called Old Ekdal) is Hjalmar's father. Years ago, he was Hakon Werle's partner. Convicted of illegally cutting down trees, Old Ekdal was imprisoned, which led to the complete loss of his fortune, reputation, and military rank. After his release, Ekdal returned to live with his son. He has obtained work copying for his former partner, who remunerates him generously. Old Ekdal lives in a fantasy world. He creates a forest for himself in the attic; the rabbits that populate the forest are the bears he once hunted. He also has a drinking problem.

Gina Ekdal is a hard-working, kind woman. She comes from a lower social class than her husband, which is demonstrated by her lapses in grammar, but she is far more efficient and caring than he is. Not only does she accept the role of taking care of the home and family...