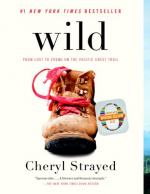 Wild: From Lost to Found on the Pacific Crest Trail Summary & Study Guide

Cheryl Strayed
This Study Guide consists of approximately 32 pages of chapter summaries, quotes, character analysis, themes, and more - everything you need to sharpen your knowledge of Wild.

Wild: From Lost to Found on the Pacific Crest Trail Summary & Study Guide includes comprehensive information and analysis to help you understand the book. This study guide contains the following sections:

This detailed literature summary also contains Topics for Discussion and a Free Quiz on Wild: From Lost to Found on the Pacific Crest Trail by Cheryl Strayed.

"Wild: From Lost to Found on the Pacific Crest Trail" is a book by Cheryl Strayed that tells the story about Cheryl's journey of self-discovery as she completes a three-month solo hike on the Pacific Crest Trail (PCT). Throughout her journey, Cheryl learns what it means to confront her fears and emotions, to appreciate the simple things in life, to take life day by day and to trust that enjoying the present moment of life is enough. The book is divided into five parts and, in each of these parts, Cheryl shares with the reader not only her current experiences on the PCT but memories from the past that she remembers while hiking and that have influenced her decision to hike the PCT.

In the first part, Cheryl discusses the main reasons she feels led her to hike the PCT, most notably her mother's shocking cancer diagnosis and death. Cheryl shares her family history, including stories of her abusive father and her relationship with her step-father and siblings. Cheryl discusses her inability to process her emotions after her mother's death and her search for intimacy that led to multiple affairs and, ultimately, the end of her marriage. At the end of part one, Cheryl is barely able to carry her backpack but determined to begin hiking the PCT.

In part two Cheryl begins her hike of the PCT, quickly realizes that she is highly unprepared and immediately contemplates quitting. She remembers when hiking the PCT was just an idea and she shares with the reader more reasons that led her to follow through with this idea: a brief period of heroin addiction, an unplanned pregnancy and an abortion. Throughout the chapters in part two, Cheryl meets several trail companions along the way. She learns much about hiking and backpacking from them, and their encouragement in her provides her with a renewed energy to continue hiking the PCT.

Cheryl continues to hike the PCT in part three. Her struggles on the trail, including shoes that are too small and tearing her feet apart, low money supply, having to bypass part of the trail, unexpected snow and getting lost, cause her to recount stories about her abusive father, her sadness about the deterioration in the relationship with her step-father and the death of her mother's horse as a sign that nothing in her life will ever be the same.

Cheryl's strength and speed on the trail continue to grow in part four. Her emotional pain begins to lessen as well, too, as she finds comfort and wisdom in her interactions with people as she hitchhikes and in her interaction with the PCT. Cheryl finds that the hole in her heart seems to be shrinking and she comes to a major realization when she notices that nature offers so much more to be amazed by and that she no longer needs to be amazed that her father was unable to properly love her.

Part five brings an end to Cheryl's story as she enters into Oregon and the last leg of her journey. In the chapters found in part five, Cheryl is finally able to face her feelings about her mother and come to a peace about who her mother was and how strong her mother's love was, allowing her to release the pain she's been holding since her mother's death. She also finds that she is able to begin the journey of letting of the relationship with her ex-husband and forgiving herself for the mistakes she made in their marriage. Cheryl completes her hike of the PCT and, at the end of the book, she finds herself feeling thankful for what the trail taught her and for being able to be at peace with the unknowns that her life will bring.

More summaries and resources for teaching or studying Wild: From Lost to Found on the Pacific Crest Trail.

Wild: From Lost to Found on the Pacific Crest Trail from BookRags. (c)2022 BookRags, Inc. All rights reserved.