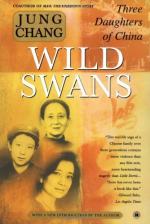 Edna St. Vincent Millay and Jung Chang
This Study Guide consists of approximately 49 pages of chapter summaries, quotes, character analysis, themes, and more - everything you need to sharpen your knowledge of Wild Swans.

The author's great-grandfather was Yang Ru-shan, born in 1894 as the only son. It was his duty to produce heirs, effectively continuing the family name. Yang Ru-shan married at fourteen to a woman six years older. His wife had been given no name at all and was merely called "Two Girl". Just a year after they were married, they had a daughter, Yu-Fang, the author's grandmother and the first of the three women in this story.

Yu-fang was forced to become concubine to a warlord general when she was only fifteen. They spent several days together before he left, returning six years later. Her life was miserable. She was under the complete control of her husband, even from afar, and had no freedom and no security. One their second visit together, Yu-fang became pregnant with a daughter who would be named Bao Qin. The child would later be adopted by her stepfather and her name changed to De-hong. After the death of the general, Yu-fang moves back into her father's house but he doesn't want her there. She eventually has a nervous breakdown and is visited by Dr. Xia, her future husband.

Dr. Xia's family object to the marriage, saying he should take her only as a concubine, but Dr. Xia loves Yu-fang and insists. One son commits suicide but the two marry anyway and soon give the children all Dr. Xia's wealth and move away to begin their life over. Yu-fang calls that the happiest time of her life. Then political unrest occurs and their lives are in upheaval.

In this atmosphere, De-hong becomes a teenager and begins to work with the Communists. It's there that she meets and falls in love with her husband, Chang Shou-yu. He is an officer and, from the beginning, is seemingly uncaring of his wife's happiness if that conflicts with what he deems is his duty to the party. They have five children and De-hong suffers one miscarriage and has one abortion. Yu-fang and Dr. Xia are living with De-hong and her family when Dr. Xia dies, leaving Yu-fang to stay on to help raise her grandchildren.

The following decades are filled with political unrest, warring factions, and conflicting regulations. Eventually, both Chang Shou-yu and De-hong are persecuted and both spend time in detention camps, being "reformed" and "reeducated". It's in this unsteady political climate that their oldest daughter, named Er-hong at birth and later called Jung, becomes a teenager. She takes little interest in politics, preferring to study and read. She's criticized for remaining apart from her fellow students, but seldom mixes unless it's with her own friends. Her father dies a broken man, confused because the party he'd loved and lived for had abandoned him.

When Jung is in her mid-twenties, she has a chance to go to Britain to study. She wins the opportunity and later decides to remain in the West.