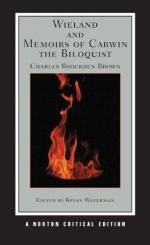 Wieland; and Memoirs of Carwin the Biloquist Summary & Study Guide

Charles Brockden Brown
This Study Guide consists of approximately 49 pages of chapter summaries, quotes, character analysis, themes, and more - everything you need to sharpen your knowledge of Wieland; and Memoirs of Carwin the Biloquist.

Wieland; and Memoirs of Carwin the Biloquist Summary & Study Guide includes comprehensive information and analysis to help you understand the book. This study guide contains the following sections:

This detailed literature summary also contains Topics for Discussion and a Free Quiz on Wieland; and Memoirs of Carwin the Biloquist by Charles Brockden Brown.

Wieland by Charles Brockden Brown is a novel of supernatural horror set near Philadelphia in the mid 1700s. Narrated by Clara Wieland, it relates her brother's descent into madness, ending with his murdering his family. It is one of the earliest American novels.

Clara lives with her brother and his family on the grounds of Mettingen, the family estate. Her brother, Theodore, has married her friend, Catharine Pleyel. Clara is in love with Catharine's brother Henry Pleyel. Clara, Henry Pleyel and Wieland start hearing mysterious voices on the estate. At first they take them to be benign, warning of dangers. Clara overhears men in her closet, apparently plotting to murder her. She runs to her brother for help, collapsing on his doorstep, and the mysterious voice warns Wieland that she needs help.

An old acquaintance of Pleyel's appears. He is called Francis Carwin. Clara immediately identifies him as a villain. He offers rationales for the supernatural voices, but Wieland rejects them. Clara's love for Pleyel grows and she is distraught when he fails to appear as agreed one day. That evening she again hears voices in her closet and decides to confront them. She finds Carwin in her closet. He claims he had planned to rape her, but she is protected. He then flees.

The following day, Pleyel appears and accuses Clara of having entered a sexual relationship with Carwin. He is angry at her having dishonored herself and calls Carwin a murderer and a thief. He claims to have overheard Clara talking with Carwin during an illicit meeting, though Clara knows that the meeting had not taken place. Though he still cares for her, Pleyel severs all ties with Clara.

Clara receives a note from Carwin asking for a meeting so that he can explain himself. When Clara arrives for the meeting, she finds the murdered body of her sister-in-law, Catharine. Wieland and Catharine's children have also been murdered. Clara is horrified to learn that Wieland has confessed to the crime, claiming he acted under direction from God. Clara believes that Carwin must have led her brother into madness. Clara falls ill and is cared for by her uncle. She agrees to go with him to Europe, but first returns to Mettingen to recover her diary.

At her house, she meets Carwin. He denies any complicity in the murders but explains that he regrets his actions towards Clara. He had not intended her harm, but events had spiraled out of his control. He tells her that he was responsible for all the mysterious voices, as he has the ability to mimic people and also to throw his voice so that it sounds like it is coming from somewhere else. This only convinces Clara further that Carwin was the voice of God that Wieland claims to have heard.

Wieland, having escaped the authorities, appears and means to kill Clara too. Carwin saves her by pretending to be the true voice of God and telling Wieland that he had never commanded him to kill his family. In grief, Wieland kills himself instead.

Three years later, Clara has gone to Europe with her uncle, reconciled with Pleyel and is married. She reflects that Wieland's weakness of character allowed him to be led astray and that Carwin would not have been able to manipulate him if he had been stronger.

The companion piece to Wieland, Memoirs of Carwin the Biloquist, is an incomplete tale, detailing Carwin's early life. He explains how he developed his vocal abilities after discovering the acoustic effects of echoes in a glen near his home. His aunt took him in, but he was left destitute upon her death. He accepted the kindness of a Mr. Ludloe, who took him to Europe and educated him. Ludloe was a utopian that was keen to build a perfect society. He took Carwin under his wing into a sort of apprenticeship, beginning the task of indoctrinating him into a secret society and warning Carwin that any disclosure of its secrets would result in his death. The narrative ends as Carwin begins to doubt Ludloe's intentions and begins concealing things from his past despite Ludloe's warnings not to do so.

More summaries and resources for teaching or studying Wieland; and Memoirs of Carwin the Biloquist.

Wieland; and Memoirs of Carwin the Biloquist from BookRags. (c)2022 BookRags, Inc. All rights reserved.