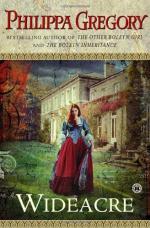 Philippa Gregory
This Study Guide consists of approximately 52 pages of chapter summaries, quotes, character analysis, themes, and more - everything you need to sharpen your knowledge of Wideacre.

This detailed literature summary also contains Topics for Discussion and a Free Quiz on Wideacre by Philippa Gregory.

Beatrice, called Miss Beatrice by almost everyone because of her position in the family, believes Wideacre is at the center of the universe. She says that she even considers the arc of the sun to be an appropriate boundary for the vertical boundary of her beloved Wideacre. Beatrice spends her days with her beloved Papa, hears the "heartbeat" of Wideacre and has a natural feel for managing the estate. It is almost casually that her father mentions that Beatrice will someday marry and leave Wideacre to become mistress of her husband's house. Beatrice is appalled, knowing that she could never be happy anywhere else and would die without the feel of Wideacre under her feet. It is some time before she realizes that it is true—that her brother Harry will inherit and that his time away at school has been preparing him for that duty.

Harry returns from school early with sexual pain and pleasure irrevocably mixed in his mind. Meanwhile, Beatrice has begun a relationship with Ralph, a gamekeeper and son of a gypsy. When Harry interrupts a sexual encounter, his reaction of pleasure to the pain Ralph inflicts with a whip puts Harry at the mercy of his sister. Ralph soon comes up with the idea to kill Beatrice's Papa, so Harry will hand over the operation to Ralph and Beatrice and they can milk the estate of its profits, bankrupting Harry and putting themselves in a position to buy the land. Beatrice agrees and changes her mind about her Papa's death too late. Ralph kills him, making it look like a riding accident. Beatrice then sets a "man trap" for Ralph and he loses both his legs, though she intended that he be killed. Ralph becomes a champion of the poor, defending against the wealthy landowners. Beatrice seduces Harry and holds him in her control, even when he marries Celia. Beatrice passes off the first child Harry fathers as an accident of indiscretion and Celia takes the child as her own, inadvertently raising it with the child's natural father—Harry. Beatrice, pregnant with a second child by Harry, agrees to marry Doctor John MacAndrew and tries to pass the child off as his but John knows better.

Meanwhile, Harry and Beatrice's Mama knows that there is something evil in the house but shrinks from what it is. When she walks in on the two coupling, she suffers an episode that puts her to bed. John, drunk from realizing that Beatrice's child is not his own, orders Beatrice to medicate her Mama but Beatrice passes on incorrect directions to Celia and Mama dies with Beatrice saying it was John's drunken incompetence. John spends time in an addiction clinic while Beatrice uses his fortune to buy off the next person to legally inherit Wideacre—a cousin, because Harry has not produced a legal male heir. The people of Wideacre pay as Beatrice tightens the methods and payment to the point that the people starve so that she can pay for making her son and daughter joint heirs. But the people have a champion. Ralph, now called the Culler, returns to Wideacre to exact his revenge. John, Celia and the children escape, knowing the Culler is seeking Beatrice. Harry dies during the escape, the victim of a weak heart and excessive lifestyle. Beatrice meets her fate willingly at the hands of the man who was once her childhood lover.

More summaries and resources for teaching or studying Wideacre.