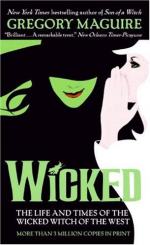 Gregory Maguire
This Study Guide consists of approximately 39 pages of chapter summaries, quotes, character analysis, themes, and more - everything you need to sharpen your knowledge of Wicked.

1. Discuss Maguire's ultimate message to the reader which lies in the following passage: "To the grim poor there need be no pour quoi tale about where evil arises; it just arises; it always is. One never learns how the witch became wicked, or whether that was the right choice for her—is it ever the right choice?

Does the devil ever struggle to be good again, or if so is he not a devil? It is at the very least a question of definitions."

What is Maguire trying to say about the nature of the image of the witch in fiction? Can you think of other "witches" that are seen this way by fiction?

2. Elphaba's sexuality is ambiguous, first at her birth and later in her love affair with Fiyero. Why do you suppose Maguire chooses to blur the gender lines of her character?

More summaries and resources for teaching or studying Wicked.

Wicked from Gale. ©2005-2006 Thomson Gale, a part of the Thomson Corporation. All rights reserved.