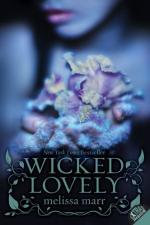 Melissa Marr
This Study Guide consists of approximately 29 pages of chapter summaries, quotes, character analysis, themes, and more - everything you need to sharpen your knowledge of Wicked Lovely.

This detailed literature summary also contains Topics for Discussion and a Free Quiz on Wicked Lovely by Melissa Marr.

Aislinn can see faeries. She was born with the sight, as was her mother and her grandmother before her. Aislinn lives with her Grams, who has taught her how to fool the faeries into believing that she does not know about them. For Aislinn's whole life, her Gram's advice has been to keep her head down and her mouth shut. She has trained in the careful art of not responding to the faery actions going on around her, sometimes even to her. Grams has lived her life in a state of cautious fear. She has remained relatively safe to an old age, but Aislinn knows that Grams is not happy. This is not what the rebellious teen wants for herself. Aislinn wants to finish school, go to college, hang out with her friends and fall in love. She wants a normal life. She wants to be free of the faeries and the knowledge of their existence.

Keenan is the Summer King, a royal faery of the Summer Court. His powers were bound in his infancy by his mother, the evil Winter Queen Beira. Keenan is an unwilling player in his mother's sick game. Keenan must choose a human girl, and hope that she is his Summer Queen, the one who will release his powers and help him to defeat his mother. For nine centuries, Keenan has chosen human girls, and for nine centuries he has been disappointed. They have either chosen not to take the test, or they have failed it and doomed themselves to live with the Winter Queen's chill, never again knowing warmth.

Aislinn notices that she is being followed by two faeries. These two faeries have been following her for a couple of weeks. As Aislinn ducks around a corner and into a comic store, one of the faeries dons a glamour and walks into the store. Usually, the the faeries that have followed her in the past keep going, making the stores a safe haven for Aislinn. This one, however, has chosen her.

Over the next few weeks, Keenan tries, in human form, to woo Aislinn, in the hopes that she will be his Summer Queen. He does not know that Aislinn can see him for what he really is or that she can hear his Summer faeries talking about her and that she knows exactly who he is. In the past, no girl has resisted Keenan as Aislinn has. In the past, none of the other girls could see Keenan for what he really was. None of them had a fear and dislike of the faeries in general and most of them did not have a mortal man with whom they were already in love. Despite Aislinn's resistance, she can not help but feel drawn to Keenan and his charms, falling deeper into the faery world and even slowly transforming into a faery herself.

As it becomes clear to everyone involved that Aislinn is the true Summer Queen, the game heats up. Beira wants Aislinn dead, but knows that to interfere directly would be to forfeit her power in the game. Donia, whose job it is to persuade Aislinn not to trust Keenan, is getting ready to betray her part in the game in order to do what she feels is right. Keenan is becoming more and more desperate that his Summer Queen will reject him completely, dooming the faeries and humans alike. Aislinn is faced with a difficult decision. Will she try to ignore what is happening, and eventually fade out from being too far away from Keenan as a Summer Faery or will she take the test and lose her mortal life forever?

More summaries and resources for teaching or studying Wicked Lovely.