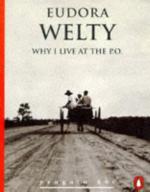 Compare & Contrast Why I Live at the P.O. by Eudora Welty

Eudora Welty
This Study Guide consists of approximately 73 pages of chapter summaries, quotes, character analysis, themes, and more - everything you need to sharpen your knowledge of Why I Live at the P.O..

1930s: The number of U.S. post offices is down from its peak of almost 77,000 at the turn of the century, but free collection and delivery are not available in all areas and many people must go to their local post offices to send and receive mail.

The vast majority of Americans receive their mail at home, delivered daily by mail carriers. For various reasons, a small fraction continue pick up their own mail at post office boxes and windows.

1930s: In the late 1930s the United States begins to recover from the economic devastation of the Great Depression, but President Roosevelt estimates that one-third of the nation lives in poverty. For the most part, the other two-thirds have not experienced dramatic change in fortune. In particular, small town life remains largely undisturbed by economic crisis.

More summaries and resources for teaching or studying Why I Live at the P.O..