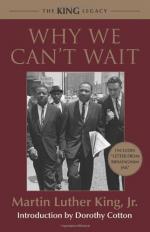 Why We Can't Wait Topics for Discussion

Identify, describe and discuss the significance of Abraham Lincoln's historical Emancipation Proclamation as it relates to the Birmingham situation.

Explain and discuss why the year 1963 is the appropriate time as indicated by the author for the Negro Revolution to develop.

Identify and describe two examples of nonviolent direct action and discuss how these actions can effectively counter the reaction of police.

Identify, list and describe at least five aspects of Bull Connor's Birmingham that makes it an appropriate target for MLK's discussion of a Negro Revolution.

Explain and discuss why singing freedom songs at mass meetings are appropriate to encourage participation in planning and organizing the demonstrations.

Describe and discuss the significance of having all volunteers agree to and sign the pledge for nonviolence.

Identify, describe and discuss at least five elements of MLK's letter to his fellow clergymen that explain his actions and...

Why We Can't Wait from BookRags. (c)2023 BookRags, Inc. All rights reserved.