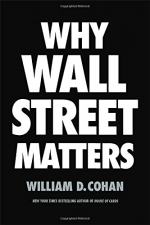 Bernie Sanders is U.S. Senator from Vermont and former Presidential candidate. He is a strong advocate of extensive Wall Street regulation. Sanders argues that Wall Street is driven by greed and other dishonest motives, suggesting that its interests are opposed to those of the American people. In contrast, Cohan suggests that many features of daily life, such as smartphones, would be impossible without the services provided by Wall Street.

Elizabeth Warren is U.S. Senator from Massachusetts and strong advocate of extensive Wall Street regulation. Warren is particularly supportive of a reintroduction of Glass-Steagall, forcing banks to separate commercial and investment activities. Cohan suggests that Warren is both misguided and driven primarily by political motives, rather than an interest in bettering the economy.

Thomas Jefferson was the third President of the United States and one of the most well-known Founding Fathers...