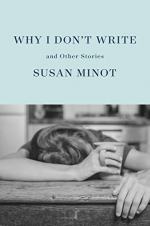 Susan Minot
This Study Guide consists of approximately 39 pages of chapter summaries, quotes, character analysis, themes, and more - everything you need to sharpen your knowledge of Why I Don't Write.

In "Occupied," though Ivy has to be home for her son, she decides to bike down Occupy Wall Street. If she were younger, she would join them. She observes the barricades, unable to extinguish memories of 9/11. She had felt like "a witness...a kind of custodian" (33).

She observes the people around her, suddenly glad she has not thought of the man she has been thinking about for a while. She sees more people, reading their signs and considering politics. She wonders if the man is around. The protesters seem purposeful, though they are not doing anything. Someone's sign reads: "Enough is Enough" (36).

Dexter Fleming is the man. She is annoyed he has returned to her mind by name. Maybe it is okay if she wants their affair to continue. He is a famous photojournalist, and handsome.

The movement seems "disorganized and...

More summaries and resources for teaching or studying Why I Don't Write.

Why I Don't Write from BookRags. (c)2022 BookRags, Inc. All rights reserved.