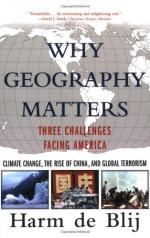 "Geography is a superb antidote to isolationism and provincialism." Chap. 1, p. 21.

"When Ronald Reagan was asked, following the disastrous attack on the marines near Beirut in 1992, why the United States had so many troops in Lebanon, he answered 'we're there because of the oil.' But there was no oil in Lebanon." Chap. 2, p. 50.

"One year from now, the room in which you are reading this will be about a half inch (13 mm) from where it is today, assuming you are somewhere in North America." Chap. 3, p. 56.

"With our human numbers approaching 7 billion and global warming opening the last niches for habitation, the question is: what happens when the ice returns, as it has more than a dozen times during the Pleistocene?" Chap. 3, p. 73.

"The people of the cyclonic regions, rank so far above those of other parts of the world that that they are the natural leaders...