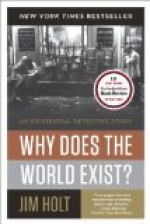 Plot Summary
+Chapters Summary and Analysis
Prologue, A Quick Proof That There Must Be Something Rather Than Nothing, for Modern People Who Lead Busy Lives, Chapter 1, Confronting the Mystery, Interlude, Could Our World Have Been Created by a Hacker?, Chapter 2, Philosophical Tour d'Horizon
Interlude, The Arithmetic of Nothingness, Chapter 3, A Brief History of Nothing
Chapters 4-5, The Great Rejectionist, Finite or Infinite?, Interlude, Night Thoughts at the Café de Flore
Chapter 6, The Inductive Theist of North Oxford, Interlude, The Supreme Brute Fact
Chapter 7, The Magus of the Multiverse, Interlude, The End of Explanation, Chapter 8, The Ultimate Free Lunch?
Interlude, Nausea, Chapter 9, Waiting for the Final Theory, Interlude, A Word on Many Worlds
Chapter 10, Platonic Reflections, Interlude, It from Bit
Chapter 11, The Ethical Requiredness of There Being Something, Interlude, A Hegelian in Paris
Chapter 12, The Last Word from All Souls, Epistolary Interlude, The Proof, Chapter 13, The World as a Bit of Light Verse
Chapter 14-15, The Self: Do I really Exist?, Return to Nothingness, Epilogue: Over the Seine
Characters
Objects/Places
Themes
Style
Quotes
Topics for Discussion
Order our Why Does the World Exist?: An Existential Detective Story Study Guide

Why Does the World Exist?: An Existential Detective Story Summary & Study Guide

Jim Holt
This Study Guide consists of approximately 27 pages of chapter summaries, quotes, character analysis, themes, and more - everything you need to sharpen your knowledge of Why Does the World Exist?: An Existential Detective Story.

Why Does the World Exist?: An Existential Detective Story Summary & Study Guide Description

Why Does the World Exist?: An Existential Detective Story Summary & Study Guide includes comprehensive information and analysis to help you understand the book. This study guide contains the following sections:

This detailed literature summary also contains Topics for Discussion on Why Does the World Exist?: An Existential Detective Story by Jim Holt.

Jim Holt, a philosopher, author, and essayist who has been published in The New York Times, The New Yorker, and similar publication, has written a book to address what might be the most fundamental question ever asked, namely "Why Is There Something Rather Than Nothing?" The book is not merely a story of his search for an answer to his question but a catalogue of conversations that Holt has with different philosophers, physicists, and writers about their answers to his question. Holt does not himself provide an answer beyond a brief "proof" given towards the end of the book. Instead, he lays out a number of options for the reader to pick and choose from. Some views are relatively familiar, such as theism, but others are wild and fantastic, such as axiarchism, where the universe exists because the nature of the good requires it. The reader is bound to find information and arguments that challenge the reach of her understanding, as this guide explains.

In "Why Does the World Exist?" Holt divides the book into chapters and interludes. The interludes are brief asides and philosophical discussions that transition between but that do not fit entirely within the main fifteen chapters, much of which cover Holt's struggle with a particular answer to his key question. There is no simple order to the answers that Holt lays out. Instead, their order reflects Holt's own questions. The book begins by explaining why the question itself makes sense and how nothingness is a real option. In other words, there really might have been nothing at all.

As the book progresses, Holt begins to lay out answers to the question. Chapter 4 introduces the reader to Adolf Grunbaum, a widely regarded philosopher of science who argues that the question has no answer and that, in fact, it does not really make sense in the first place. Holt concludes that Grunbaum's rejection of the question is too hasty. Chapter 6 records Holt's discussion with Oxford philosopher Richard Swinburne, a Christian theist who thinks it most probable that God created the universe. While Holt finds Swinburne kind and his reasoning impressive, he argues that Swinburne's version of God leaves enough questions unanswered that God is not an attractive solution. In Chapter 7, Holt engages David Deutsch's theory of the multiverse, the view that a great many universes exist. Chapter 8 introduces physicist Alex Vilenkin, who thinks that universes can come into being from relatively little energy and in Chapter 9, the reader meets Steven Weinberg, a physicist who thinks we might answer Holt's question when we come to have a final theory of matter and energy.

Interspersed with these reflections are various important events in Holt's life, such as the death of his dog and his mother, along with his busy travels in Paris. These parts add narrative life to the book.

More summaries and resources for teaching or studying Why Does the World Exist?: An Existential Detective Story.

Why Does the World Exist?: An Existential Detective Story from Gale. ©2005-2006 Thomson Gale, a part of the Thomson Corporation. All rights reserved.