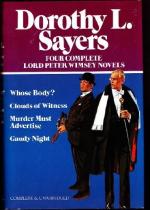 This detailed literature summary also contains Topics for Discussion and a Free Quiz on Whose Body?: A Lord Peter Wimsey Novel by Dorothy L. Sayers.

Lord Peter Wimsey is headed for a book auction when he learns from his mother that a corpse has been found in the bathtub of a local architect. Peter, an amateur sleuth, promptly makes arrangements to send his manservant, Bunter, to the auction in his stead and to go to the scene of the corpse. He arrives while the police are gone and the owner of the house, Mr. Thipps, grants Peter access to the bathroom. There he finds a nude man wearing nothing but a pair of expensive glasses, carefully arranged in the tub. The police soon come to the conclusion that Mr. Thipps, his servant named Gladys, her boyfriend William, or some combination of the three, are responsible for the man's death.

Meanwhile, a man has been reported missing, Mr. Reuben Levy. He is a financier and left the house without any clothing. The man investigating that case happens to be a friend of Peter's, Inspector Parker. Parker notes that the initial supposition is that the man in the tub is Levy, but that is soon proved false. As Parker and Peter begin working on their cases, they initially believe them to be two separate cases but eventually find a connection in Sir Julian Freke, noted surgeon, author and specialist of nervous disorders. Parker eventually discovers that Levy had last been seen in the neighborhood of Freke's residence next to the hospital, and that Freke had once been romantically involved with Levy's wife but she had chosen Levy over Freke.

Peter chases down the owner of the expensive glasses found on the corpse and discovers that it is an elderly attorney who could not possibly have been involved. At another point, Peter believes that an American financial man named John Milligan must have been involved. It takes longer to eliminate Milligan but Peter eventually does. As Peter considers a long list of clues related to the case, he knows that he has all the information necessary to solve the case if he could only put it together correctly. When it dawns on him that Freke must have killed Levy, taken the corpse of a vagrant that was left at the hospital for medical research to the bathtub near the hospital and buried Levy in the place of the vagrant, Peter is horrified and hopes that he is wrong though he knows that he is not. Once Freke realizes that Peter is onto him, he plans to commit suicide. The police arrive in the nick of time to prevent that and discover that Freke has left a comprehensive document, outlining all aspects of his role in the murder and pointing out that the only things that went wrong were unavoidable accidents.